Thesaurus of English words and phrases, classified and arranged so as to facilitate the expression of ideas and assist in literary composition; 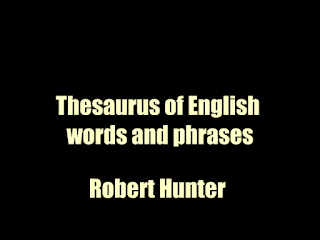 The First Edition of Dr Rogct's Thesaurus was published in the year 1853, and a second in the ensuing spring. On the issue of the third, in 1855, the volume •was stereotyped. Since that time until now, the work has been reprinted in the same form and with little alteration, in rapidly succeeding editions, the printing of which has worn out the original plates. During the last years of the author's life, which closed, at a very advanced age, in the month of September 1869, he was engaged in the task of collecting additional words and phrases, for an enlarged edition which he had long projected. This he did not live to complete, and it became my duty, as his son, to attempt to carry the design into execution. ,
The result of the author's labours was embodied in a copy of the Thesaurus, in which the margins and spaces about the letterpress were closely covered with written words and phrases, without any very precise indication of the places in the text where additions or alterations were intended to be made. On a careful examination.
I came to the conclusion that, in order to introduce them with advantage, it would be necessary to make some slight changes; without, however, interfering at all with the framework of the book, and but little with the details of its system. In this proceeding, my course has been mainly determined by the following considerations. Any attempt at a philosophical arrangement, under categories, of the words of our language, must reveal the fact that it is impossible to separate and circumscribe the several groups by absolutely distinct boundary lines.
There will always be found to exist, between the words in one group and those in another, a variety of mutual affinities, corresponding with similar relations among the ideas expressed. Many words, originally used to express simple conceptions, are found to be capable, with perhaps a very slight modification of meaning, of being applied in many varied associations.
Repetitions of these words have a tendency to spread themselves, as it were, in transitional films, around the clusters of expressions into which we may have attempted to marshal our vocabulary. Connecting links, thus formed, induce an approach between the categories; and danger arises that the out- lines of our classification may, by their means, become confused and eventually merged. Owing to the employment, in innumerable in- stances, of one and the same word in a variety of different bearings and relations, the fabric of our language has become a texture woven into one by the interlacing of countless branches, springing from separate stems; and these are further complicated by cross relations among themselves.
Were we to disengage these interwoven ramifications, and seek to confine every word to its main or original import, we should find that some secondary meaning has become so firmly associated with many words and phrases, that to sever the alliance would be to deprive our language of the richness due to an infinity of natural adaptations.
Download 25 MB PDF book Direct Download