The kingdom of the blind novel 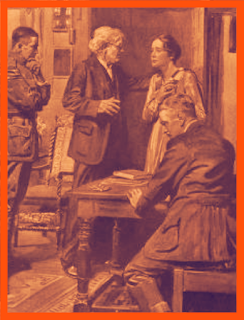 The plot revolves around the development and implementation of secret war weapons aimed at German Submarines. Aeroplanes are still a novelty, and there is a nighttime Zeppelin raid on a secret weapons laboratory.
Oppenheim served as a press liaison with the British military in France. He was one of the authors who notably tried to warn Britain about German intentions before the war, and then cursed the inadequate British conduct of the war. Writing clearly from the viewpoint of the upper class, this novel is an interesting window into the thoughts and feelings of the participants. Well written and well-plotted.
The kingdom is England, the blind are all too many Brits, many in high places. Oppenheim was never one to underestimate the Germans, but, as we know, following orders doesn't always win the day.
Edward Phillips Oppenheim was an English novelist, a prolific writer of best-selling genre fiction, featuring glamorous characters, international intrigue and fast action. Notably easy to read, they were viewed as popular entertainments. He was featured on the cover of Time magazine in 1927
Illustrated by F. Vaux Wilson
Download The novel in PDF format.