The higher powers of man 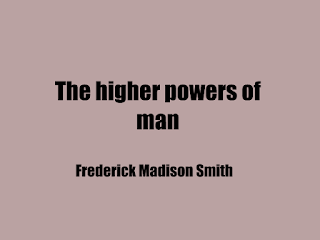 The phenomena of "second breath" are known to every schoolboy and have played a great role in primitive human life. When a boy has run until he is out of breath and ready to drop with fatigue, he often experiences a reinforcement of energy and a new type of breathing and then can run on indefinitely.
So in studying late at night, if we force our way through the ripraps of exhaustion and sleepiness, we often experience new wakefulness, like a kind of afflatus or in- spiration, and we can write better and study more easily. It is not enough to describe this state by saying that the fatigue sense is fatigued and drops out of function; nor is it enough to conceive it, with Felta, as an adrenaline state, although, as Cannon has shown, the sudden flushing of the blood with adrenaline is the physiological basis of the reinforcement of energy that fear and anger so often give. Psychologically, there is much to be said in favour of the views which conceive of it as if the individual in such states were able to tap the resources of the race that slumber in him.
There are always two aspects of human nature. One is the individual and conscious, and the other, the phyletic or racial, which is more unconscious and generic. It is this that constitutes the deeper nature of man and in such varied phenomena as inspiration, whether thought to be due to the Holy Ghost or to a muse; and ecstasy, whether of sense, thought, feeling, or will; and in all superlative achievements of man in every domain, we have manifestations of this higher, larger, stronger, racial self, expressed in the individual.
There is much justification for saying that most of the greatest achievements of man, not merely in artistic creation and the works of genius, where we are almost ready to recognize it, but even in intellectual domains, have been done in this second or higher state, or at least have owed much to it, and a high authority on war has lately told us that this war will be won by that side that can ring up most of this reserve energy, when they go "over the top," or in a bayonet charge. It is not surprising that these phenomena have, especially in recent years, been connected with sex erethism, for in reproduction we have, as it were, an apparition of the soul of the race per- forming its great function of transmitting the sacred torch of life along with and beneath the hedonic personal factors. Moreover, it is now pretty clear that a sporty diathesis is often associated with self-abuse.
This accounts for the inveterate propensity in every religion, from Dionysiac orgies to certain recent forms of revivalism, to be accompanied by sex phenomena; and it gives a certain basis to theories that conceive many, if not most, of the higher moral, intellectual powers of man as products of sex sublimation.
This view, too, gives us the best key yet found to the problem of sex instruction, which is that wherever we can excite inter-est of any sort and degree, we are setting a backfire to erotic temptations, and that to fill the skulls and curricula with topics that absorb attention and arouse enthusiasm, to have the life of the young, particularly during the plastic and susceptible years of adolescence, pervaded with activities that are highly toned emotionally, is one of the best criteria by which to measure the effectiveness, not only of a system of education but even the value of religion.
When the school is dull and life is drab and religion a dead form, and in general when zests grow pale, then the dangers of lust increase. The world is just beginning to learn the value of these higher states and how to turn on super-personal motivations. Some modern conceptions of Jesus make Him essentially not only the totemic, racial man but the One who, more than any other, throughout His public ministry, maintained this higher and more exalted state. The study of these phenomena which Doctor Smith here sets forth is well calculated to give us a higher perception of the possibilities of life and of every kind of education.
It shows that the higher phenomena of holiness are not something entirely apart but really belong to the altitude phenomena of human nature, which are incomplete without them. Not only religion but morality is illuminated. These dynamic energies that break into the ordinary life of the individual may be good or bad, but the bad is more than ever seen to be only undeveloped good, and certain principles, such as those known to psychology as transfer and the conditioned reflex, that teach us how easily, if we only know the secret, the powers of evil can be converted, as the wrath of man may be made to praise God.
The more we know of the old cults about the eastern Mediterranean that preceded Christianity, and also about mysticism and esoteric knowledge, which found imperfect expression in the loftier insights of all the great mystics, even in alchemy and the hermetic and Rosicrucian symbols, the more we are now learning how intense is the warfare man has waged with himself to overcome animal and infantile propensities by giving them an ever higher, more spiritual interpretation, so that we can now glimpse the pregnant sense in which consciousness itself sprang from and can be understood only by conscience. Thus, while man has always been prone to unchain and even give way to passion, he has also always been unremitting in his efforts to transmute it into its higher psychodynamic equivalents. Thus the highest virtue, beauty, truth, is itself passionate.
Download PDF book