The Hermetic and alchemical writings of Paracelsus Volume 2 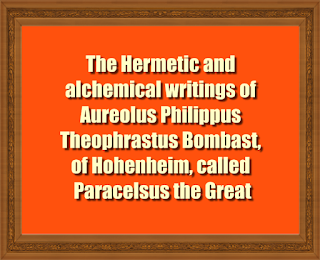 Paracelsus, born Philippus Aureolus Theophrastus Bombastus von Hohenheim, was a Swiss-German physician, chemist, botanist, alchemist, astrologer and general occultist who is famous for his iconoclastic rebellion against the conservative medical orthodoxy of his day, as well as for his bold, new ideas in medicine,


Excerpt
If my dearest sons, we consider the misery by which we are detained in a gross and gloomy dwelling, exposed to hunger and to many and various accidents, from all sources, by which we are overwhelmed and surrounded, we see that we could scarcely flourish, or even live, so long as we followed the medicine prescribed by the ancients. Kor we were continually hedged in by calamities and bitter conditions and were bound with terrible chains. Every day things became worse with us, as with others who were weighed in the same balance, whom also the ancients have not so far been able to help or to heal by means of their books. We do not in this place advance the different causes of this misfortune. This only we say, that many teachers by following the ancient methods have acquired for themselves much wealth, credit, and renown, though they did not deserve it, but got together such great resources by simple lies. From which consideration we have wished to elaborate and write this memorial work of ours, that we might arrive at a more complete and happier method of practice since there are presented to us those mysteries of Nature which are too wonderful to be ever thoroughly investigated.


Arthur Edward Waite was an American-born British poet and scholarly mystic who wrote extensively on occult and esoteric matters and was the co-creator of the Rider-Waite tarot deck.