The devil in love 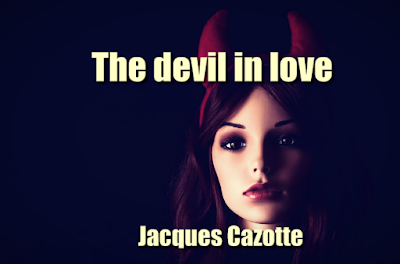 First Published in 1772, this story finds the devil falling in love with a man and disguising himself as a woman to win his affection. Some people consider it a very early example of the fantasy genre
CAZOTTE was born in Dijon in 1720. His literary work appears to have been little more than a hobby, since he passed most of the years of his life as a Civil Servant, eventually rising to a position of some importance in the Administration de la Marine in Martinique.
On his return to Paris, he found the Reign of Terror in progress and was soon imprisoned on charges in connection with incriminating documents found in the Tuileries. On the intervention of his daughter he was liberated, only to be rearrested a few days later, tried, and executed in September 1792. Le Diable Amoureux is the most famous of Cazotte’s works and was published in 1772. An English translation by an unknown hand made its appearance in 1793 and forms the text of this reprint. A generation later another and inferior version was issued under the title of Biondetta or the Enamoured Spirit (1810) which the anonymous translator “‘ dedicated without permission to M. G. Lewis, Esq.’ whose notorious novel ‘The Monk was, it 1s alleged, shamelessly plagiarized from Le Diable Amoureux. The illustrations in this volume are original line engravings, that is to say, the artist has cut his own designs direct upon the copper plate with a graver.
This is an innovation, in spite of the fact that process 1s the oldest method of engraving. But though line-engraving was constantly, and in fact almost exclusively, employed in the eighteenth century Sor the illustration of books, the engraver was not usually responsible for the designs; in most cases, he simply engraved a painter’s or a designer’s originals. In the nineteenth century etching and particularly wood-engraving almost entirely superseded line-engraving, and later the photographic process superseded both. The novelty of M. Laboureur’s illustrations to The Devil in Love lies in the fact that they revive a tradition long since abandoned.
Download PDF book 9 MB