The city of light; a novel of modern Paris 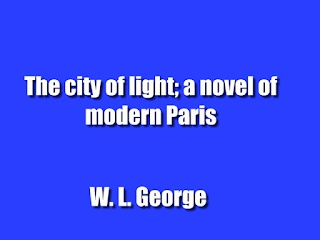 Walter Lionel George (20 March 1882, Paris, France – 30 January 1926) was an English writer, chiefly known for his popular fiction.
A romantic novel happens in Paris by an author who was born in France.
Excerpt:
Indeed! sensible when she was struggling for a thing as precious as her own life. At that moment she hated and despised her husband. She had no sym- pathy with the masculine temperament; she could not grasp that its function was to construct, to compromise with difficulties and to sacrifice principles so that it might go on, build, make money, reputation by which the race would benefit; she only saw egoism and indifference where there is the blind natural force which creates in the male an illusion of egoism so that he may serve an altruistic purpose. She thought that her husband ought to be like her, hard, mulish so that he could maintain; she was there to protect young life, he to attack the world on its behalf; but she would have had him enlist under the woman's colours, stand by her side and hold the fort.
The old couple did not speak for some moments. Madame Duvernoy laid her head on the pillow as if Tcnocked down by an unexpected blow. Yes, of course, she knew the law; she knew that up to the age of twenty-five a son could not marry without his parents' consent, that on his twenty-fifth birthday he could dispense with their approval by serving upon them the equivalent of a summons. A summons! She had a horrid vision of the scrubby huissier in dingy black who would mumble at her the formula by which Henri signified that he flouted her authority. She saw the man's shaven face and dirty whiskers, heard the dreary monotone of his voice as he gabbled his message, anxious to be done with it and breaking her heart.
Download PDF book