The books in my life, by Henry Miller 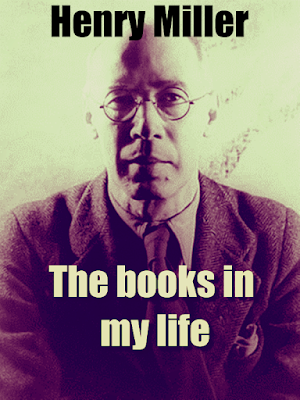 The purpose of this book, which will run to several volumes in the course of the next few years, is to round out the story of my life. It deals with books as a vital experience. It is not a critical study nor does it contain a program for self-education. One of the results of this self-examination — for that is what the writing of this book amounts to — is the confirmed belief that one should read less and less, not more and more.
As a glance at the Appendix will reveal, I have not read nearly as much as the scholar, the bookworm, or even the " well-educated " man — yet I have undoubtedly read a hundred times more than I should have read for my own good. Only one out of five in America, it is said, are readers of " books." But even this small number read far too much. Scarcely anyone lives wisely or filthy. There have been and always will be books that are truly revolutionary — that is to say, inspired and inspiring.
They are few and far between, of course. One is lucky to run across a handful in a Lifetime. Moreover, these are not the books that invade the general public. They are the hidden reservoirs that feed the men of lesser talent who know how to appeal to the man in the street. The vast body of literature, in every domain, is composed of hand-me-down ideas. The question — ^never resolved, alas! — is to what extent it would be efficacious to curtail the overwhelming supply of cheap fodder. One thing is certain today — the illiterate are definitely not the least inteUigctit among us.
In this age, which believes that there is a shortcut to everything, the greatest lesson to be learned is that the most difficult way is, in the long run, the easiest. All that is set forth in books, all that seems so terribly vital and significant, is but an iota of that from which it stems and which it is within everyone's power to tap. Our whole theory of education is based on the absurd notion that we must learn to swim on land before tackling the water.
It applies to the pursuit of the arts as well as to the pursuit of knowledge. Men are still being taught to create by studying other men's works or by making plans and sketches never intended to materialize. The art of writing is taught in the classroom instead of in the thick of life. Students are still being handed models which are supposed to fit all temperaments, all kinds of intelligence. No wonder we produce better engineers than writers, better industrial experts than painters.
Download