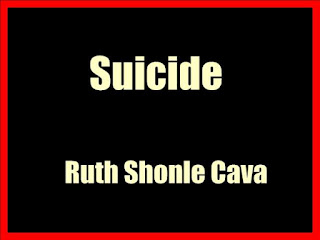 The subject for this study was chosen because of an interest in human nature in the midst of perplexities and because of curiosity as to why people, even when perplexed, commit suicide A preliminary exploratory jaunt into published material on suicide revealed a few general treatises by Euro-pean writers, many monographs by French and German psychiatrists and physicians, and almost nothing by English, and particularly by American, writers It showed further a tendency to treat suicide statistically, neglect of life-histories, which are perhaps not so exact as statistics, but which give vastly more insight into, and understanding of, human nature, and an emphasis on cases showing some mental abnormality
The normal person who committed suicide was overlooked, as though the popular prejudice were indeed true that suicide is de facto proof of abnormality.
A further survey of material revealed numerous sources of data, many of which had scarcely been touched by previous writers Collecting these data meant searching through hundreds of books on dusty library shelves in the hope of garnering a sentence here, a paragraph there, not of itself valuable but exceedingly revealing when compared with other statements.
Much of the historical and ethnological material was thus gathered piecemeal, although the studies by Westermarck and Lecky aided maternally and are referred to freely and frequently.
This historical and ethnological approach gave a perspective to the whole problem difficult to obtain in any other way. Suicide appeared in its relation to other customs, to attitudes toward life and religion, to political and social changes
There was made possible, not a mere chronicling of facts, but an analysis of suicide as a social phenomenon Statistics furnished the best method of comparing suicide rates of different groups, of tracing trends, and of discover-ng what factors are associated with suicide Many of the tables used had been compiled by other writers.
They have been brought as nearly down to date as possible, and in the case of the United States and certain cities in the United States, new combinations of tables and new compilations have been made The statistical study of suicide 1s still, however, in a preliminary state Few students have at- tempted to go beyond simple rates and a few sets of correlations There is here a vast untapped fund of material for further analysis.
The bulk of the study consists of an analysis of individual cases of suicide, their classification to types and the establishment of certain generalizations regarding them Just as the historical and ethnological study showed suicide as a concomitant of other social phenomena, so the life- histories revealed suicide as a concomitant of such personal experiences as severe crises, certain emotional states, and certain tolerant attitudes toward suicide The book is, therefore, what its title states, a study of suicide in its relation to social and personal disorganization It is intended to appeal both to those working with dis- organized persons and to students of the theory of human nature.

Who is Ruth Shonle Cavan

Ruth Shonle Cavan was an American sociologist based at the University of Chicago. She specialized in deviance and criminology and was a leader of the Chicago school of sociology