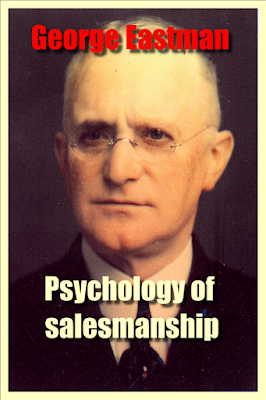 Excerpt:
This book is intended for the person who is convinced that salesmanship is an honourable profession, rendering important and difficult service. It is for those who have awakened to the fact that the salesman is not born ready-made, with his powers fully developed.
The salesman must be made, in large part at least, by serious study. The efficient salesman must know the workings of and have skill in influencing complicated and intangible mental processes, which determine the behaviour of men. It takes persistent hard work to gain an understanding of the factors and processes which determine the actions of men.
The salesman's efficiency will vary directly with this understanding. The scientific farmer, the teacher, the accountant, the lawyer, the engineer, the architect, the physician, the minister, and many others, have found it well worth their while to make serious and careful preparation for the practice of their profession.
The salesman will, at last, come to realize that intelligent preparation for his work is quite as important,j and will bring equally great reward.
The salesman can determine whether he is fully prepared for the practice of his profession by asking himself a few questions, and grading himself on his ability to answer them. What is salesmanship? What does the approach aim to accomplish? What are the laws which govern the direction of attention to a thing, when it has once been secured?
How is attention related to interest? What interests does the normal man have? Do you know to what interests your selling appeal should be directed? What is the relation between interest and desire? How would you undertake to arouse desire? When you have aroused desire, do you know how to carry it over into action? How can you tell when you have reached the "psychological moment" for attempting to close? How can a man think ahead and plan what he will say next, while his attention is adequately given to what he is saying? What are the best methods of learning; remembering, and thinking?
George Eastman (July 12, 1854 – March 14, 1932) was an American entrepreneur who founded the Eastman Kodak Company and helped to bring the photographic use of roll film into the mainstream. Roll film was also the basis for the invention of motion picture film stock in 1888 by the world's first filmmakers.
Eastman was associated with the Kodak company in an administrative and a business executive capacity until his death; he contributed much to the development of its notable research facilities. In 1911 he founded the Eastman Trust and Savings Bank.
Download PDF 4.4 MB