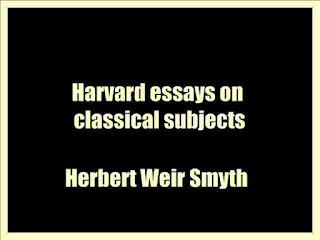 Contents:
The new criticism of Roman art, by G. H. Chase.--Notions of humanity among the Greeks, by C. B. Gulick.--An ancient letter writer--Alciphron, by C. N. Jackson.--Greek and Roman ascetic tendencies, by C. H. Moore. --Some aspects of an ancient Roman city, by M. H. Morgan.--Plato and pragmatism, By C. P. Parker.--Ovid and the spirit of metamorphosis, by E. K. Rand.--Greek conceptions of immortality from Homer to Plato, by H. W. Smyth
Excerpt:
Such unity as these Essays aim to secure is of necessity the larger unity of sympathetic interpretation of certain aspects of the life and thought of classical antiquity. Nor was a closer coherence desirable if the truest independence of the contributors was to be preserved.
Two of the Essays touch at a common point, though but for a moment; and this coincidence was not to be avoided, as it is not to be deprecated, since asceticism with its passion to subdue the turbulent senses, is inevitably linked with the yearning after immortality which possessed some of the most earnest minds of the ancient world. Regard for a more intimate association of parts might have made a book of essays on things Greek or on things Roman. But the less severe unity of the present volume is designed to bear witness, however inadequately, to the Harvard conviction that, for the purpose for which the ancient classics have their permanent and inalienable value, the literature and art of Greece and the literature and art of Rome are so intimately bound together that they may not suffer divorcement. We are all of us Greeks, we are all Romans.
The Greeks are the creators of the original literature of Europe. Roman literature takes over and carries on Greek literature, tempers it with a moral impulse, endows it with an emotional quality; and withal has the consciousness that it is the voice of the nation that conquered and ruled the world. The Romans are the transmitters of the Hellenic ideal to the modem world, and their literature alone insures the continuity of ancient and modern culture. The ancient world still speaks to the changing present, and with an undivided voice.
The literature, the philosophy, and the art of the last four centuries have been fostered by the literature, philosophy, and art of Greece and Rome. An ineradicable influence that penetrates all modern societies, whose interdependence is marked by this common possession, is negligible only by those in whom the historical sense is enfeebled or absent.
But, apart from this, and largely because of the very fact that our own modern world may be too much with us, it conduces to intellectual health to scrutinize ourselves and our works by the standard of age, long over-past indeed, but an age whose aspirations are not alien to us and whose thought possesses an indefeasible power to clarify our own. The contributors to this volume are all present members of the Department of the Classics at Harvard, with the exception of Professor Morgan, whose essay on "Some Aspects of an Ancient Roman City" is one of the last pieces of work he completed before his earnest and active life came to an end.
The Editor gladly acknowledges the assistance he has received from the friendly cooperation and generous support of many friends of classical letters and of Harvard and in particular Messrs. Lane, Sexton, Ladd, Brandegee, Gray, Cummings, and Gardner, members of the Committee appointed by the Board of Overseers to visit the Department of the Classics.
Download pdf ebook 5 MB