Greek divination; a study of its methods and principles 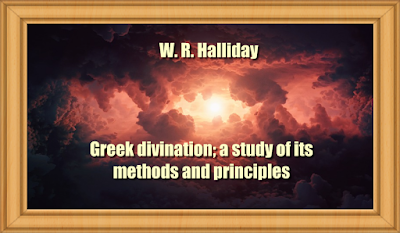 In the following pages the attempt has been made to give some account of the methods of divination employed by the ancient Greeks, together with an analysis of the underlying principles or presuppositions which, however unconsciously, moulded their forms and maintained their vitality.
The dangers and difficulties of such an undertaking are obvious. Such analysis must always be philosophical rather than historical in the sense of presenting a series of facts in a strict sequence of chronology.
The fossils with which the student of religion must work are stratified culturally not chronologically, and their coordination must always bear something of an arbitrary aspect. Again, the last fifty years have revolutionised alike the study of " natural man" and that of chap. the origins of Greek civilisation. But in neither direction have the feet of science reached the firm ground; we have fled the worse, but have not yet found the better.
On the one hand, the results of Ethnology are as yet uncertain and insecure, and, despite the courageous attempt of M, Reinach, the time when a satisfactory sketch of the course of religious development can be written has not yet arrived.
On the other hand, while a corner of the curtain which veils the prehistoric period of Aegean history has been raised, our knowledge alike of victors and of vanquished in that struggle between an ancient civilisation and the invasion of an alien stock is meagre indeed. We are still groping in a Dark Age, and the instruments at our disposal are faulty. We possess a mass of mythology; much of it of a late tradition, and some of it to a considerable degree worked over.^ In the light of survivals in a cult, hints of the popular byways of religious practice, and the observed phenomena in the religious beliefs of other races at various stages of culture, we are tempted to guess the nature of the causes which gave rise to these traditions. Employ- ing these instruments, analysis can give us a broad outline of the course of development, whose stages it is impossible to date, a genetic not a historical account. And even here there is always the danger that we may have wholly misinterpreted the nature of the fact to be explained, or, witness the discussions of the supposed vestiges of Totemism in ancient Greece, that we are explaining obscurity per obstetrics.
Sir William Reginald Halliday was a historian and archaeologist who served as Principal of King's College London from 1928 to 1952. Born in British Honduras in 1886, Halliday was educated at Winchester College and New College, Oxford graduating with a first in Literae Humaniores.
Download 6 MB PDF book