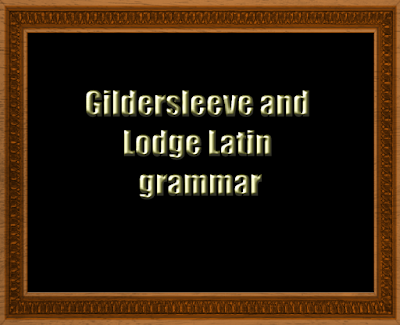 This is a very bright and instructive book even if it is written so many years back! A wonder of simplicity and explanations that really makes one understand Latin grammar.
The first edition of this LATIN GRAMMAR appeared in 1867, the second in 1872; the third edition, carefully revised and very much enlarged, is herewith presented to the public. In the preparation of this third edition, the office of the senior collaborator has been chiefly advisory, except in the Syntax. In the syntax nearly everything that pertains to the history of usage has been brought together by Professor Lodge; but for all deviations from the theory of former editions, we bear joint responsibility.
A manual that has held its place, however modest, for more than a quarter of a century, hardly needs an elaborate exposition of the methods followed; but as the new grammar embraces a multitude of details that were not taken up in the old grammar, it has been thought fit that Professor Lodge should indicate the sources of the notes with which he has enriched the original work.
This handbook of Latin grammar is a wonderful work unveiling Latin step by step to anyone who wanted to venture into the land of the Classics.
Basil Lanneau Gildersleeve was an American classical scholar.
Download 25 MB