Freedom of mind in willing 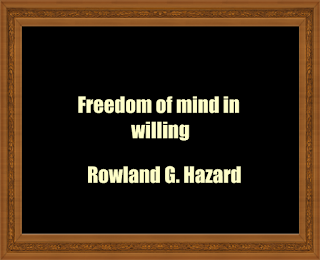 The public mind is at present so engrossed with other pursuits, and so satisfied with its progress in them, that there is little room to hope that it will bestow much attention upon the subject of this volume.
Physical Science and Material Progress are now the absorbing objects of effort. To these, all utility is ascribed, to the exclusion of the Metaphysical, which lies under the imputation of being both uninteresting and useless.
Why this opprobrium and whence the general neglect, the absolute indisposition, to inquire into the structure and conditions of our spiritual being, which, as the source of all our power and all our enjoyments, one might naturally suppose would most interest us, and at the same time, by its mystery, most excite our curiosity? That the discoveries in Physics, so varied and so magnificent, have largely contributed to our material comforts, have feasted the intellect and even regaled the imagination, is undoubtedly one cause of this neglect of the science of mind. But there are other reasons, we may mention the real difficulties of the subject.
These are of two distinct kinds; first, those of ascertaining the truths; and second, those of imparting them after they have been ascertained. The first of these is, in some respects, peculiar. We want to examine that which examines; we want the mind to be employed in observing its own action, i. e,, we want it to be doing one thing when it is of necessity doing another. A further difficulty, even in the investigation of the phenomena of mind, arises from the fact that the language applied to metaphysical science is very imperfect as an instrument of thought. The science of mind has a very little language of its own, and in adopting for it what has been formed and fitted to another department of knowledge, much confusion and error result. The ambiguity, or various meanings of the terms, so often mislead the investigator himself, that he is not infrequently obliged to relinquish the instrumental aid of words, and directly examine his original ideas and conceptions of the subjects of inquiry. The difficulty of imparting the results in a language so imperfect is obvious and is increased when it has been discarded in reaching them.
But, with all this in appreciation of its benefits and all its recognized difficulties. Metaphysics has its peculiar attractions. The questions of every child, the yearnings of the adult, though in expression only occasionally gleam- ing through the settled gloom of discouragement and despondency, still manifest the fervid curiosity in regard to that mysterious invisible, which knows, thinks, feels and acts; and even in those too busy, too sluggish, or too hopeless to put forth an effort to gratify it. The reason of its being neglected lies not so much in its want of attraction, as in the prevailing idea of its in- utility; and this idea, though now magnified by temporary causes, has a foundation in the fact, that no investigation of the nature of our faculties and powers, mental or physical, is essential to that use of them which our early existence demands. For this, we have the requisite knowledge by intuition. We can use our powers without studying either Anatomy or Metaphysics. It is not, then, surprising that we should early direct our attention to the study of those extrinsic substances and phenomena of which more knowledge is obviously and immediately useful.
The want of satisfactory results has also had its influence; and per- haps there is no question, the discussion of which has tended more to bring upon Metaphysics the reproach of being unfruitful, than that of the " Freedom of the Will." The importance of removing this grand obstruction to the progress of ethics and theology is appreciated only by those who in their researches have encountered it. They alone have caught glimpses of the radiant fields of speculation which lie beyond, and most men regard the speculations upon it, not only as having furnished no new truth but as having obscured what was before known.
Whatever opinion may be formed of the success or failure, of my effort to elucidate this subject, I trust it will be admitted, that the arguments I have presented, at least, tend to show that the investigation may open more elevated and more elevating views of our position and our powers; and may reveal new modes of influencing our own intellectual and moral character, and thus have a more immediate, direct, and practical bearing on the progress of our race in virtue and happiness, than any inquiry in physical science.
Rowland Gibson Hazard was an American industrialist, politician, and social reformer.
Download PDF book