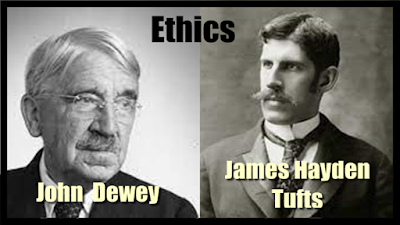 About the authors:
John Dewey was an American philosopher, psychologist, and educational reformer whose ideas have been influential in education and social reform. He was one of the most prominent American scholars in the first half of the twentieth century
James Hayden Tufts, an influential American philosopher, was a professor of the then newly founded Chicago University. Tufts was also a member of the Board of Arbitration and the chairman of a committee of the social agencies of Chicago. The work Ethics in 1908 was a collaboration of Tufts and John Dewey
Except:
The significance of this text in Ethics lies in its effort to awaken a vital conviction of the genuine reality of moral problems and the value of reflective thought in dealing with them. To this purpose are subordinated the presentation in Part I. of historic material; the discussion in Part II. of the different types of theoretical interpretation, and the consideration, in Part III., of some typical social and economic problems which characterize the present.
Experience shows that the student of morals has difficulty in getting the field objectively and definitely before him so that its problems strike him as real problems. Con- duct is so intimate that it is not easy to analyze. It is so important that to a large extent the perspective regarding it has been unconsciously fixed by early training.
The historical method of approach has proved in the classroom experience of the authors an effective method of meeting these difficulties. To follow the moral life through typical epochs of its development enables students to realize what is involved in their own habitual standpoints; it also presents a concrete body of subject matter which serves as the material of analysis and discussion.
The classic conceptions of a moral theory are of re- markable importance in illuminating the obscure places of the moral life and in giving the student clues which will enable him to explore it for himself. But there is always the danger of either dogmatism or a sense of unreality when students have introduced abruptly to the theoretical Ideas. Instead of serving as tools for understanding moral facts, the ideas are likely to become substitutes for the facts.
When they are proffered ready-made, their theoretical acuteness and cleverness may be admired, but their practical soundness and applicability are suspected. The historical introduction permits the student to be present, as it were, at the social situations in which the intellectual instruments were forged. He appreciates their relevancy to the conditions which provoked them, and he is encouraged to try them on simple problems before at- tempting the complex problems of the present.
By assisting in their gradual development he gains confidence in the ideas and in his power to use them. In the second part, devoted more specifically to the analysis and criticism of the leading conceptions of moral theory, the aim accordingly has not been to instil the notions of a school nor to inculcate a ready-made system, but to show the development of theories out of the problems and experience of every-day conduct, and to suggest how these theories may be fruitfully applied in practical exigencies. Aspects of the moral life have been so thoroughly examined that it is possible to present certain principles with the confidence that they will meet general acceptance.
Rationalism and hedonism, for example, have contributed toward a scientific statement of the elements of conduct, even though they have failed as self-inclosed and final systems. After the discussions of Kant and Mill, Sidgwick and Green, Martineau and Spencer, it is possible to affirm that there is a place in the moral life for a reason and a place for happiness, — a place for duty and a place for valuation.
Download PDF book 16.5 MB