An outline of logic 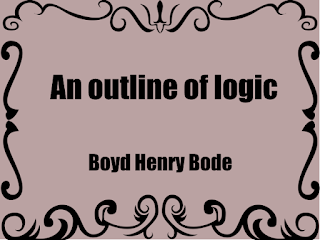 The aim of this volume is, among other things, to give a concrete discussion of ambiguity, to simplify the study of causal connections, and to treat with greater detail than is usually done the type of inference called circumstantial evidence, the nature of proof, and the postulates of reasoning.
The place assigned to the syllogism is relatively small, the subject is presented with a minimum of detail. In the distribution of emphasis, the function of logic as a guide in reasoning has been constantly borne in mind. It is partly for this reason that the illustrations are, as a rule, taken from other sources than the physical sciences, because I incline to think that in the past these latter have relied upon more than is desirable. Finally, I have added a chapter on sense-perception, in the hope that it will aid in making logic a propaedeutic to philosophy.
A word or two of explanation may be in place re- regarding the discussion of causal connections. I have ventured to depart from the treatment made classic by J. S. Mill because the treatment in question seems to me to be neither logically nor pedagogically justifiable. In the first place, we must distinguish between connections that are universal and connections that are causal, and also between the corresponding methods of proof.
While a universal connection may be of a causal character, this is not necessarily the case. Moreover, the causes with which we habitually deal in science and in everyday life are by no means universally followed by the effects with which they are properly correlated. The proof of causal connection as such is dependent, I think, upon the Method of Difference alone. It is not necessary to show in detail that Mill's other methods introduce no new principle. The Method of Concomitant Variations, for example, is merely the Method of Difference as applied when the point of difference shows quantitative variations.
The Joint Method, which Mill himself calls the Indirect Method of Difference, is the Method of Difference as applied in comparisons between units which consist of groups instead of individual cases. The Method of Agreement can show, at most, a universal connection, without determining the character of the connection. Ordinarily, the cases which are assigned to this method fall more properly under the ' Indirect Method of Difference,' as when we examine the connection between water supply and typhoid fever. And the Method of Residues, while informing us that the causes are already known are not sufficient to account for the total effect, neither furnishes a clue to the remaining cause or causes nor enables us to test their claim when they have been discovered. The nature of my obligations to other writers, particularly to Professor James, will be easily discerned by the trained reader from the citations and references. I wish, further, to express my indebtedness to my former colleagues in the University of "Wisconsin, Professors E. B. McGilvary and F. C. Sharp, who have read the book in manuscript and aided me with numerous valuable criticisms and suggestions.
Download PDF book