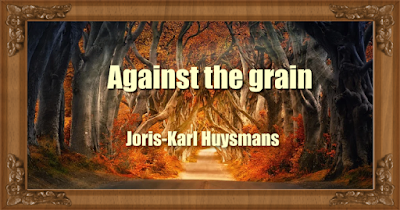 Against the grain novel by Charles-Marie-Georges Huysmans was a French novelist and art critic who published his works as Joris-Karl Huysmans.
The novel is translated from French by John Howard.
Excerpt from the translator's introduction:
Yet we can by no means altogether account for Huys- mans by race and environment. Every man of genius is a stranger and a pilgrim on the earth, unlike other men, seeing everything as it were at a different angle, l mirroring the world in his mind as in those concave or convex mirrors which elongate or abbreviate absurdly all who approach them. No one ever had a keener sense of the distressing absurdity of human affairs than Huysmans.
The Trocadero is not a beautiful building, but to no one else probably has it appeared as an old hag lying on her back and elevating her spindle shanks towards the sky. Such images of men's works and ways abound in Huysmans' books, and they express his un- affected vision of life, his disgust for men and things, a shuddering disgust, yet patient, half-amused. I can well recall an evening spent some years ago in Huys- mans' company. His face, with the sensitive, luminous eyes, reminded one of Baudelaire's portraits, the face of a resigned and benevolent Mephistopheles who has discovered the absurdity of the Divine order but has no wish to make improper use of his discovery. He talked in low and even tones, never eagerly, without any emphasis or gesture, not addressing any special person; human imbecility was the burden of nearly all that he said, while a faint twinkle of amused wonderment lit up his eyes. And throughout all his books until almost the last "I'eternelle betise de I'humanite" is the ever-recurring refrain.
Against the grain or its french name " A rebours is a novel by the French writer Joris-Karl Huysmans. The narrative centres on a single character: Jean des Esseintes, an eccentric, reclusive, ailing aesthete
Download 5.5 MB PDF book