A history of philosophy. Ancient and modern 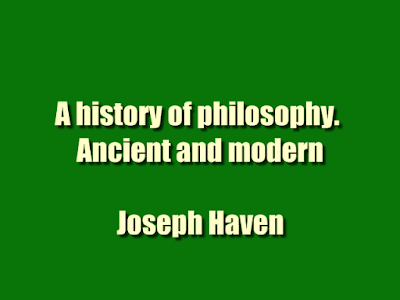 Excerpt:
The preparation -of the following work ran parallel with the studies which filled the life of the author, and its completion and revision for publication was his last work. It is now put forth as a fitting complement to the " Studies in Philosophy and Theology," and to the treatises on " Mental Philosophy " and on " Moral Philosophy " which have been so favourably received by the public. It will, as we think, be welcomed not only by those who have been the pupils of its author, either through his lecture- room or through its works but by that large and increasing class of thoughtful minds who will be interested in the history of what the human mind has done in " the noblest study of mankind."
The labour and enthusiasm of Dr Haven's life were largely given to the presentation of that history, as viewed from his own characteristic stand-point of full loyalty at once to the word of God and to the convictions of the human mind, first to his classes in collegiate and professional study, and afterwards to those intelligent thinkers, who are still pursuing "liberal education" in the midst of the activities of adult life. It is hoped that this book may not only; be found valuable for study and reference in educational institutions, but that it may continue and extend that usefulness in the general community upon which its author Bcemed to be entering when he was called away.
or us, with the records and resources at our present command, the history of Ancient Philosophy must be chiefly that of Grecian philosophy. It was there that, so far as known to us, speculative inquiry into the origin and causes of things first assumed a scientific form. That it first commenced there, is not at all probable. No nation, it is reasonable to suppose, has ever existed, possessing any considerable degree of civilization and culture, which has not also exercised itself upon that great problem of human thought which in all ages present themselves to the reflecting mind. Egypt undoubtedly had her philosophy before the days of Abraham and the Pyramids; India had hers. But neither in Egypt nor in India, did philosophic speculation assume, so far as yet appears, a strictly scientific form; nor do we know what was, in the earliest times, the philosophy of either.
Download 10.5 MB PDF book