A grammar of freethought 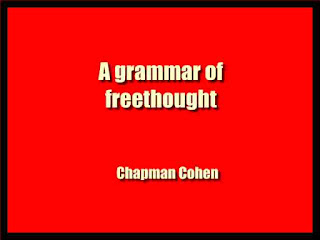 It must be left for those who read the following pages to decide how far this book lives up to its title. That it leaves many aspects of life untouched is quite clear, but there must be a limit to everything, even to the size and scope of a book; moreover, the work does not aim at being an encyclopedia, but only an outline of what may fairly be regarded as the Freethought position.
Freethought, again, is too fluid a term to permit its teachings to be summarized in a set creed, but it does stand for a certain definite attitude of mind in relation to those problems of life with which thoughtful men and women concern themselves. It is the mental attitude that I aim at depicting. To those who are not directly concerned with the attack on supernaturalism, it may also be a matter of regret that so much of this work is concerned with criticism of religious beliefs. But that is an accident of the situation.
We have not yet reached that stage in affairs when we can afford to let religion alone, and one may readily be excused the suspicion that those who, without believing in it, profess to do so, are more concerned with avoiding a difficult, if not dangerous, subject, than they are with the problem of developing safe and sound methods of thinking.
And while some who stand forward as leaders of popular thought fail to do their part in the work of attacking supernaturalistic beliefs, others are perforce compelled to devote more time than they would otherwise to the task. That, in brief, is my apology for concerning myself so largely with religious topics and leaving almost untouched other fields where the Freethought attitude would prove equally fruitful of results.