A book of meditations 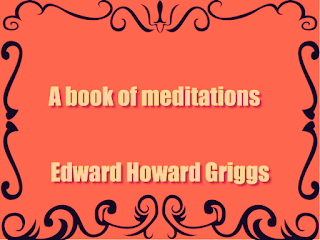 Wonderful philosophical thoughts by Edward Howard Griggs, a joy to read and meditate upon them. I guess he was affected by Marcus Aurelius' book
Edward Howard Griggs was a lecturer and educator. He taught at Indiana University and later Leland Stanford University. It is estimated that Griggs gave about 13,000 lectures to over 8 million people. Griggs wrote on a variety of topics including education, philosophy, culture, biology, and "statesmanship".
Excerpt:
Time sweeps on
The pink colour fades from the light fleeces of cloud, the twilight descends over the city, in the street, the crier calls the evening papers, the throng hastens homeward in the dusk: Men work or rest, but Time sweeps on! The glory of Italy crumbles from the walls where fading frescoes decay, it broods over old churches and palaces like the fading light over the darkening city, it is buried in the countless pictures in which it descends from the past: The sun shines and is silent, but Time sweeps on! The Greek is a splendid memory, the Egyptian and Assyrian a dim legend, the palaces of Nineveh are fallen, the splendours of Alexandria are sunk beneath the mud of the Nile.
The Jew prays beside the weeping wall that sorrowfully whispers the past of Solomon, Babylon is lost in the mist, and Tyre and Carthage are but the vibrant echoes of a forgotten dream: Nations rise and fall, but Time sweeps on! Where the Britons, clothed in skins, met under some ancient oak, their vast and gloomy cities vomit their poisonous breath. Where Alexander led his adventurous soldiers or Cleopatra met the legions of Rome, there English and German traders barter the machine-woven stuff of today. Where cities stood the sand whirls in wild triumph, and the gardens in which lovers sang echo to some night beast of prey.
The golden palace of Theodoric is shrunk to the fragment of a wall. The tomb of an emperor is the play-house of the mob. Causes for which men fought and died are forgotten, and the fighters, too, are locked in the vast embrace: Men live and die, but Time sweeps on! The figures carved upon the graves of the Crusaders are worn smooth by innumerable feet.
The walls of Venetian palaces which echoed to the laughter of gorgeous women are lipped by the silent kisses of the dead canals.
The Forum where Cato and Cicero walked is sunk below the level of the street and littered with the stone waste of what once were temples: Men hate and love, but Time sweeps on! On, on, relentlessly, unhurried by our passionate desires, unchecked by our wild regret, remorselessly, unheedingly, Time sweeps on. Carrying us with it in its merciless and exultant flood, or leaving us stranded like foam-bubbles upon the shore; sweeping vast civilizations into arrogant being, and surging over their last dying traces: Time ever sweeps on, and on, and on!
Download PDF book 3.2 MB