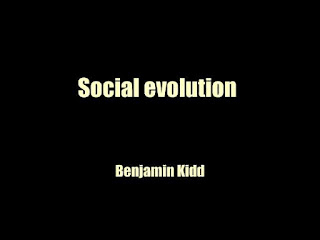 One of the most remarkable epochs in the history of human thought is that through which we have passed in the last half of the nineteenth century. The revolution which began with the application of the doctrines of evolutionary science, and which received its first great impetus with the publication of Darwin's Origin of Species^ has gradually extended in scope until it has affected the entire intellectual life of our Western civilization. One after the other we have seen the lower sciences revivified, reconstructed, transformed by the new knowledge.

The sciences dealing with a man in society have naturally been the last to be affected, but now that the movement has reached them the changes therein promise to be even more startling in character.


History, economics, the science of politics, and, last but not least important, the attitude of science to the religious life and the religious phenomena of mankind, promise to be profoundly influenced. The whole plan of life is, in short, being slowly revealed to us in a new light, and we are beginning to perceive that it presents a single majestic unity, throughout every part of which the conditions of law and orderly progress reign supreme. Nothing is more remarkable in this period of reconstruction than the change which is almost imperceptibly taking place in the minds of the rising generation respecting the great social and religious problem of our time.


We have lived through a period when the very foundations of human thought have been rebuilt. To many who in the first stage saw only the confusion occasioned by the moving of old landmarks, the time has been one of perplexity and changing hope. But those whose lot it has been to come later have already an inspiring and uplifting conception of the character of the work which the larger knowledge is destined eventually to accomplish.


That the moral law is the unchanging law of progress in human society is the lesson that appears to be written over all things. No school of theology has ever sought to enforce this teaching with the directness and emphasis which it appears that evolutionary science will in the future be justified in doing. In the silent and strenuous rivalry in which every section of the race is of necessity continually engaged, permanent success appears to be invariably associated with the ethical and moral conditions favourable to the maintenance of a high standard of social efficiency, and with those conditions only.

Benjamin Kidd was a British sociologist whose first job was a civil service clerk, but by persistent self-education, he became internationally famous by the publication of his book Social Evolution in 1894.