The empire of business 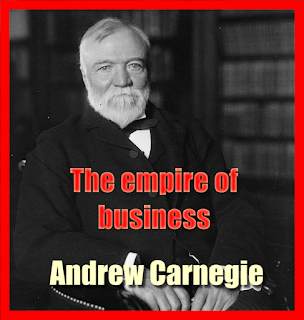 Contents:
The road to business success -- The A.B.C. of money -- The common interest of labour and capital -- Thrift as a duty -- How to win fortune -- Wealth and its uses -- The bugaboo of trusts -- Anglo-American trade relations -- Business -- Steel manufacture in the United States -- The cost of living in Britain -- Oil and gas wells -- The three-legged stool -- Railroads past and present -- Iron and steel at home and abroad -- The Manchester School and to-day -- What would I do with the tariff if I were czar?
Excerpt:
One false axiom you will often hear, which I wish to guard you against: "Obey orders if you break owners." Don't you do it?
This is no rule for you to follow. Always break orders to save owners. There never was a great character who did not some- times smash the routine regulations and make new ones for himself.
The rule is only suitable for such as have no aspirations, and you have not forgotten that you are destined to be owners and to make orders and break orders. Do not hesitate to do it whenever you are sure the interests of your employer will be thereby promoted and when you are so sure of the result that you are willing to take the responsibility. You will never be a partner unless you know the business of your department far better than the owners possibly can. When called to account for your independent action, show him the result of your genius, and tell him that you knew that it would be so; show him how mistaken the orders were. Boss your boss just as soon as you can; try it on early.
There is nothing he will like so well if he is the right kind of boss; if he is not, he is not the man for you to remain with — leave him whenever you can, even at a present sacrifice, and find one capable of discerning genius. Our young partners in the Carnegie firm have won their spurs by showing that we did not know half as well what was wanted as they did. Some of them have acted upon occasion with me as if they owned the firm and I was but some airy New Yorker presuming to advise upon what I knew very little about. Well, they do not interfere with much now. They were the true bosses — the very men we were looking for.
Andrew Carnegie was a Scottish-American industrialist and philanthropist. Carnegie led the expansion of the American steel industry in the late 19th century and became one of the richest Americans in history. He became a leading philanthropist in the United States and in the British Empire.
Download PDF book