The crusade of the Excelsior (1887) PDF Novel by  Bret Harte 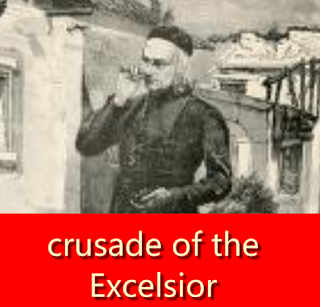 A mixture of fantasy and realism, the plot arising from the arrival, by accident, of the American ship "Excelsior" at a secluded port in Lower California. Here the crew meet with droll adventures, and with some exceedingly funny people.
Bret Harte was an American short story writer and poet,
Excerpt:
It was the 4th of August, 1854, off Cape Corrientes. The morning was breaking over a heavy sea and the closely- reefed topsails of a barque that ran before it bearing down upon the faint outline of the Mexican coast. Already the white peak of Colima showed, ghost-like, in the east; already the long sweep of the Pacific was gathering strength and volume as it swept uninterruptedly into the opening Gulf of California. As the cold light increased, it could be seen that the vessel showed evidence of a long voyage and stress of weather. She had lost one of her spars, and her starboard davits rolled emptily. Nevertheless, her rigging was taut and shipshape, and her decks scrupulously clean. Indeed, in that uncertain light, the only moving figure beside the two motionless shadows at the wheel was engaged in scrubbing the quarter-deck — which, with its grated settees and stacked camp-chairs, seemed to indicate the presence of cabin passengers. For the barque, Excelsior, from New York to San Francisco, had discharged the bulk of her cargo at Callao and had ex- tended her liberal cabin accommodation to swell the feverish Californian immigration, still in its height.
Download PDF Book