Full title: The Buddhism of Tibet: or, Lamaism, with its mystic cults, symbolism and mythology, and in its relation to Indian Buddhism 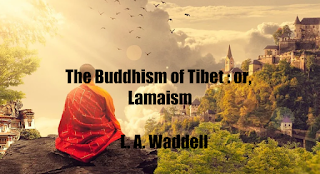 It attempts to disentangle the early history of Lamaism from the chaotic growth of fable which has invested it, With this view, the nebulous Tibetan " history " so-called of the earlier periods has been somewhat critically examined in the light afforded by some scholarly Lamas and contemporary history; and all fictitious chronicles, such as the Mani-Kah-'bum, hitherto treated usually as historical, are rejected as authoritative for events which happened a thousand years before they were written and for a time when writing was admittedly unknown in Tibet.
If, after rejecting these manifestly fictitious " histories " and whatever is supernatural, the residue cannot be accepted as altogether trustworthy history,  at least affords a fairly probable historical basis, which seems consistent and in harmony with known facts and unwritten tradition. It will be seen that I consider the founder of Lam a- ism to he Padma-sambhava — a person to whom previous writers. are wont to refer in too incidental a manner. Indeed, some careful writers ' omit all mention of his name, although he is considered by the Lamas of all sects to be the founder of their order, and by the majority of them to be greater and more deserving of worship than Buddha himself. Most of the chief internal movements of Lamaism are now for the first time presented in an intelligible and systematic form. Thus, for example, my account of its sects may be compared with that given by Schlagintweit,^ to which nothing practically had been added.
About the author
Lieutenant Colonel Laurence Austine Waddell, was a Scottish explorer, Professor of Tibetan, Professor of Chemistry and Pathology, Indian Army surgeon, a collector in Tibet, and amateur archaeologist. Waddell also studied Sumerian and Sanskrit; he made various translations of seals and other inscriptions.
Download 24 MB PDF book