The academic questions, treatise de Finibus, and Tusculan disputations. With a sketch of the Greek philosophers mentioned by Cicero translated by Charles Duke Yonge 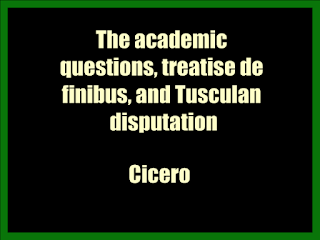 In the works translated in the present volume, Cicero makes such constant references to the doctrines and systems of the ancient Greek Philosophers, that it seems desirable to give a brief account of the most remarkable of those mentioned by him; not entering at length into the history of their lives, but indicating the principal theories which they maintained, and the main points in which they agreed with, or differed from, each other.
The earliest of them was Thales, who was born at Miletus, about 640 b.c. He was a man of great political sagacity and influence, but we have to consider him here as the earliest philosopher who appears to have been convinced of the necessity of scientific proof of whatever was put forward to be believed, and as the originator of mathematics and geometry.
He was also a great astronomer; for we read in Herodotus (i. 74) that he predicted the eclipse of the sun which happened in the reign of Alyattes, king of Lydia, b.c. 609. He asserted that water is the origin of all things; that everything is produced out of it, and everything is resolved into it. He also asserted that it is the soul which originates all motion, so much so, that he attributes a soul to the magnet. Aristotle also represents him by saying that everything is full of Gods.
He does not appear to have left any written treatises behind him: we are uncertain when or where he died, but he is said to have lived to a great age — to 78, or, according to some writers, to 90 years of age.
Download 31 MB PDF book