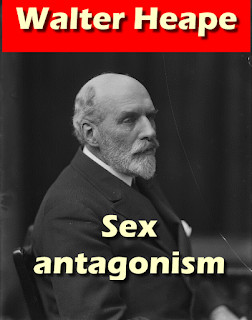 Contents:
Introductory.--The problems.--Exogamy.--Totemism.--Maternal impressions and birth-marks.--Biology and Dr Frazer's theory.--Primitive and modern sex antagonism
Walter Heape FRS was a British zoologist and embryologist, famous for the first successful mammalian embryo transfer. Until the age of seventeen, Walter Heape, born to a wealthy family, was taught by a private tutor and then was a student for one year at Owens College.
Excerpt:
The condition of unrest that permeates society today is apparent to all thoughtful men and women in every civilised country. Discontent in one form or another is rife amongst us, and daily it becomes more evident that, in some instances, what has for long smouldered as a grievance cannot any longer be restrained from bursting out into active antagonism.
The origin of this universal unrest may be traced broadly to three sources, Racial antagonism. Class antagonism, and Sex antagonism. In every country, one or other of these three forms of discontent is prominently exhibited. In our own country, partly because of our great possessions, the first is a cause for continual anxiety, though the long experience is apt unduly to duU popular apprehension in that direction.
The second has ever been common with us as it has been with all civilised peoples; the fact is generally recognised, and although the drastic change in the relation of class to class seems once more imminent, changes of this kind are no new thing, A  and we may have confidence that so long as the people of a country are patriotic, class readjustment is not necessarily a national evil but rather a sign of the vigour of a people.
It is the exhibition of ignorant selfishness or gross brutality by a few individuals most directly concerned in some particular class battle, the incitement to violence preached by fanatics and charlatans, and a general tendency to disregard the law, which causes the timid to fear; but such phenomena are incident to all wars, and it is a class war we are experiencing.
The third cause of unrest is a very different matter. Sex antagonism is a family war, and as family strife leads to the most bitter of all quarrels so this war threatens to lead to enmity which may last for many years and work untold evil on the nation. For that reason, it is, in my opinion, the most fateful of all the three forms of antagonism I have mentioned, and the inherent differences which exist in the character, sympathies, aims, and methods of the combatants cannot fail to lead to cruel misunderstandings and virulent recriminations which the moderate party on either side will find impossible to explain or restrain.
Download PDF book 5 MB