Othello, the Moor of Venice with introduction and notes by K. Deighton 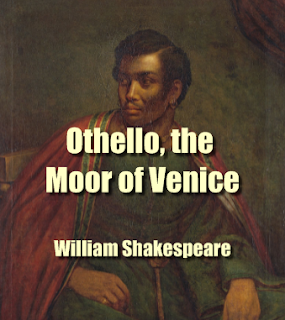 The story revolves around two characters, Othello and Iago. Othello is a Moorish general in the Venetian army charged with the generalship of Venice on the eve of war with the Ottoman Turks over the island of Cyprus. He has just married Desdemona, a beautiful and wealthy Venetian, much younger than him, against the wishes of her father. Iago is Othello's jealous and bitter ensign who maliciously goads his master's jealousy until the usually stoic Moor kills his beloved wife in a fit of blind rage. Due to its enduring themes of passion, jealousy and race, Othello is still widely performed and has inspired numerous adaptations.
To summarize even upon a single point the vast mass of criticism which in England, Germany, America, and France have grown up around Othello would be impossible within reasonable limits. The character of Othello’s jealousy and the motives of Iago’s malignity, as studied and analyzed by writers from Johnson to Dowden, would alone fill a considerable volume. To Indian students, to those at all events who are reading the play for the B. A. degree, I would suggest that they should confine themselves to someone commentator; and of all the commentators with whom I am acquainted, Hudson in his Shakespeare: his Life, Art, and Characters, seems to give in the simplest language the most satisfactory conspectus of the various points of interest, together with a clear and intelligent analysis of all the important characters in the play.
Download 15 MB PDF book