New light from the great pyramid 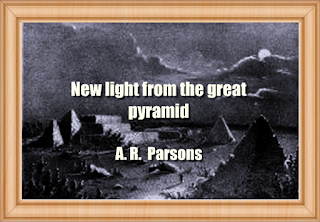 the astronomico-geographical system of the ancients recovered and applied to the elucidation of history, ceremony, symbolism, and religion, with an exposition of the evolution from the prehistoric, objective, scientific religion of Adam Kadmon, the macrocosm, of the historic, subjective, spiritual religion of Christ Jesus, the microcosm
Excerpt:
After several years of research and comparison, and classification of results, it became apparent that an exhaustive treatment of the vast subject would involve a new universal synthesis rivalling in its proportions the Synthetic Philosophy of Herbert Spencer.
The attempt to execute such a work being out of the question for one actively engaged in ]professional life, a point of departure was sought for the consecutive presentation of some of the most striking facts brought to light by these investigations. Such a point of departure subsequently appeared as a result of a most surprising and unexpected discovery with reference to the Great Pyramid, viz., that it forms the connecting link between Astronomy and Geography, and at the same time between the Religion and Science, of the ancient world.
Attempts to reconstruct the long-fallen arch of prehistoric science, art, and religion have not been wanting in the past. Should the present work proves successful where its predecessors have failed, namely, in indicating the right line of effort for the restoration of the long-broken continuity of human consciousness between historic man and his prehistoric ancestors, that success will be largely due to the discovery that, in the Great Pyramid mankind possesses the veritable keystone of that arch., whose broken fragments have been the wonder and the enigma of ages.
Download 15 MB PDF book