Looking for luck: the life story of a rolling stone 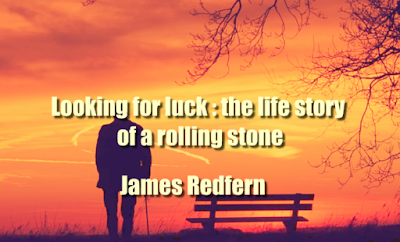 The book is probably a real autobiography of the author
.
One morning in the spring of 1895, I was behind the counter of my father's shop, as usual, when a grizzled, bearded man of about forty walked in and bade me good morning. That was how it all started. I was rising sixteen at the time and clerk-book-keeper- head-salesman and errand-boy to my father who owned a little drapery and general stores in William Street, Perth, Western Australia. It was a life I found, in common, I suspect, with most boys of that age, a trifle dull to say the least, but since leaving school my parents had spent most of their time dis- cussing what they should do with me, and in the meanwhile left me to grow restless and discontented behind the counter. In those days, of course, Perth was a very different place from the present imposing city, and I could scarcely complain of the noise and racket of life in a metropolis!
But there was a general air of restlessness in the settlement at the time. Every week faces we knew well would disappear and the news would come in that they had gone into the bush prospecting, that they were off to Coolgardie the rush to the fields was still on then or that they had gone out to some sheep-station to join a relative. To me, the solution of this disappearances sounded infinitely attractive and the tales of pioneering I had heard from my grandfather who had come out to Western Australia in the Swan River Settlement of 1831, only made my youthful spirit chafe further at confinement, despite my mother's assurance that I should think myself lucky to be where I was in a comfortable home, without the necessity of risking death and (what seemed worse to her) irregular meals, in order to scrape a bare living. But while this might be true of many, there were some we knew who had found more than that, and the sight of the money coming over my father's counter and the free spending of some of the brighter spirits back from the goldfields in the town only served to remind me that I was wasting my time. I was a big, husky boy, looking all of twenty I suppose, which was probably why my conversation with the man who came into the shop that spring morning took the line it did.
Download PDF book