Lewis Arundel; or, The railroad of life; 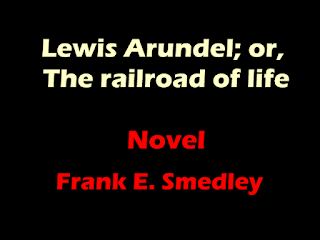 Excerpt:
he spoke he uttered a low, peculiar whistle; and in obedience to his signal a magnificent Livonian wolf-hound, which bore sufficient likeness to the animal it was trained to destroy to have alarmed a more discriminating zoologist than poor Rachel, sprang into the room, and, delighted at rejoining his master, began to testify his joy so roughly as not only to raise the terror of that damsel to a screaming point but to cause Mrs Arundel to interpose a chair between herself and the intruder, while Rose, pale but silent, shrank timidly into a corner of the apartment.
In an instant, the expression of Lewis's face changed; his brow contracted, his mouth grew stern, and fixing his flashing eyes upon those of the dog, he uttered in a deep, low voice some German word of command; and as he spoke the animal dropped at his feet, where it crouched in a suppliant attitude, gazing wistfully at his master's countenance, without offering to move. "You need not have erected a barricade to defend yourself, my dear mother," said Lewis, as a smile chased the cloud which had for a moment shaded his features; "the monster is soon quelled. Rose, you must learn to love Faust — he is my second self; come and stroke him." Thus exhorted. Rose approached and patted the dog's shaggy head, at first timidly, but more boldly when she found that he still retained his crouching posture, merely repaying her caresses by fixing his bright, truthful eyes upon her face lovingly, and licking his lips with his long red tongue. " Now, Rachel," continued Lewis, " it is your turn; come, I must have you good friends with Faust."
The novel seems like victorian drama, please send us a review if you read it ,
Download