From Franklin to Nansen, tales of Arctic adventure, retold 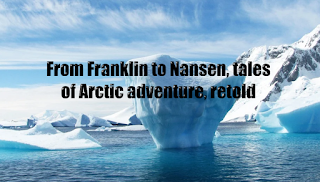 While stories of the Arctic explorers and their efforts to reach the North Pole have been told, again and again, the constant renewal of expeditions adds every year fresh incidents to the record, until it may almost be said that the fascination of the frozen North is as inexhaustible as the list of Polar heroes is illimitable.
Nor is the interest confined solely to the achievement of modern explorers. However great the results of their exertions may be, the fact that, in spite of all the advantages conferred by recent scientific discovery and modern appliances, the explorers of today have failed to penetrate the uttermost secret of the world of ice, renders more impressively heroic the struggles of the earlier travellers whose equipment, viewed in comparison with that of modem man, was apparently so inadequate and often inappropriate.
No series of Polar adventure stories would be complete without a prominent place being given to the earlier explorers and especially to that British hero, Franklin, whose name is so inseparably associated with the history of Arctic exploration. The account of his daring voyages, and of his tragic end at the moment of victory, has already- been given in many a form; but the tale is one which will stand re-telling for generations yet to come. In the present instance, it has been of necessity briefly written, but in such a manner as will, it is hoped, without loss of interest, render' clear the comparison of the conditions under which he and his brave companions worked and fought to their death, with those which existed for such later expeditions as Nansen's and Peary's. Accounts of other journeys, which it is believed have not previously been brought together in a single volume, are put before the reader, in order that the acquaintance with Arctic heroes and their doings may be made as extended, as varied, and as entertaining as possible. The source of the information (as is frequently mentioned in the text) is the personal narrative of the explorer concerned, where available; and if the interest aroused in any of them requires more to satisfy it than the exigencies of space renders possible in this volume, the attention which will thereby be drawn to the more comprehensive records will stand as a slight acknowledgement of the in- indebtedness of the writer of these re-told stories to the authors of the original narratives.
Download PDF book