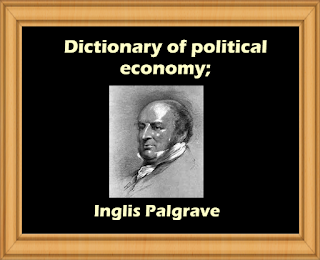 Excerpt:
The complete preface to a book naturally cannot be written till the work itself is finished; - but with the first volume, some remarks by way of introduction will be useful, to explain the object for which this work has been written and the method on which it is arranged.
The primary object of the Dictionary of Political Economy is to provide the student with such assistance as may enable him to understand the position of economic thought at the present time and to pursue such branches of inquiry as may be necessary for that end. The table of the contents of the work shows how large is the range of investigation which the student must follow at the present time. During recent years the course of economic study has extended so widely that it was obviously impossible to restrict the work to the old and formerly well- recognised boundaries.
The development of the historical school has opened out new and fertile fields, while the wants of those who follow the mathematical method of study have also to be considered. These two main lines of treatment are here but mentioned as examples. They are far from exhausting the countless ramifications of inquiry now rightly thought necessary for the complete investigation of a study bounded only by the requirements of human life in every social relation. In making the selection necessitated by the limits of space, the requirements of different classes of students have throughout been borne in mind. On the one side purely business matters, such as banking, the foreign exchanges, and the operations of the mint come in; on the other, subjects of a philosophical character have been dealt with, such as questions of ethics and methods of definition, analysis, and reasoning;— and the ways in which diagrams and mathematical pro-cesses may lend assistance to the economic inquiry have also been discussed. Again, those interested in historical studies require an explanation of words found in early works, and those derived from classical and mediaeval times; also of legal phrases, now archaic, together with the modern correlative terms, for only thus can it be understood how ancient usage has influenced present habit.
Sir Robert Harry Inglis Palgrave FRS FSS was a British economist
Download 36 MB PDF book   Volume 1
Download 39 MB PDF book   Volume 2
Download 41.6 MB PDF book   Volume 3