An introduction to philosophy (1921) by Wilhelm Windelband Translated by Joseph McCabe. 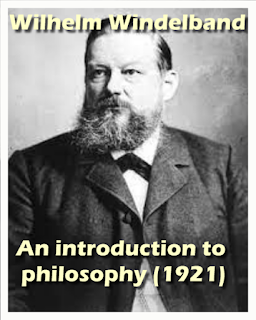 Wilhelm Windelband was a German philosopher
The Introduction to Philosophy which I here offer to the public gives a general view of philosophical problems and explains the tendencies of the various attempts to solve them. It seeks to provoke the reader to think over the great problems of life. It is in no sense an introduction to a special philosophical system, but it makes a very wide survey of all the possibilities in the way of solutions.
Naturally, it is based upon the author's personal view, as the student of philosophy will easily perceive, but this will not be pressed, or suffered to influence the author's judgment in appraising other systems of thought. In view of the aim of the work, I have not found it necessary to burden it with literary references to the historic systems to which reference is made in its pages.
Aim of the Introduction Craving for a philosophy of life Difficulty of philosophy Presuppositions of philosophic thinking The problems and the solutions of them The history of philosophy Antinomianism Historical, systematic, and critical methods Literature Knowledge and values Distribution of the problems.
We today find the words " Introduction to Philosophy ' as the title of a book more frequently than we used to do. This assuredly means that there is a growing demand for philosophy, and we see this reflected more and more distinctly in our whole literature, in the experience of booksellers, and in our academic life. The demand plainly implies a craving for a philosophy of life. This feeling, which Schopenhauer has, with his customary felicity, called " the metaphysical craving," lives inextinguishably in human nature, though it assumes different forms in different ages, according to their spiritual character. There are ages in which it almost entirely fades from view: ages which seem to be almost absorbed in the definite tasks set them by their own pressing problems, either of the politico-social, the artistic, the religious, or the scientific life. These are times which vigorously pursue such special aims, work unswervingly for their accomplishment, and find complete satisfaction in their task. They may be entitled " positive ages." Such a period, certainly, was the second half of the nineteenth century, which has been characterised with equal justice as the scientific or the technical or the political age.
Download PDF book 13.8 MB