An English girl; a romance, novel 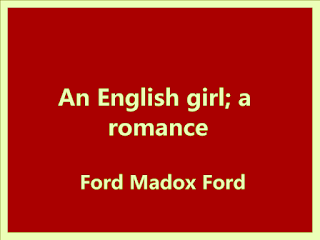 Ford Madox Ford was an English novelist, poet, critic and editor whose journals The English Review and The Transatlantic Review were instrumental in the development of early 20th-century English and American literature.
Excerpt:
the first thing he said when she came into the room was: " My father is dead," and the announcement stayed her at the door, her hands falling to her side, open, as if, though a moment before they would have known their place and have lain upon the two shoulders of the man she was to marry, now, so new a creature did this announcement make him seem, that she had, at least for a moment, to hesitate as to whether he could still belong to her. It was under the definite spell of that feeling that she uttered the words: " Oh dear! " words that implied more than anything else " tell me all: tell me the worst! " And he was so sensitive to her moods that he, too, neither made to take her into his arms nor to utter an endearment. " I am the richest citizen in the world, for what it's worth," he said, with a flavour of scorn, as if he were quoting the words of a man for whom he had an infinite contempt.
The novel needs to be reviewed.
Download