A tale of two cities by Charles Dickens 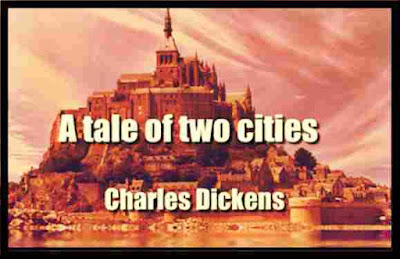 A Tale of Two Cities, by Charles Dickens, deals with the major themes of duality, revolution, and resurrection.
From introduction:
Charles Dickens was born at Landport, a suburb of Portsea, near Portsmouth, on February 7, 1812. His father was a clerk in the Navy Pay Office in the Ports- mouth dock-yard. In 1814 the family went to London to live, but two years later they were removed to Chatham, near Rochester, in Kent, where they remained until 1821. Dickens loved these Kentish neighbourhoods and described them often in his books.
At Chatham, David Copperfield stopped in his runaway flight to Dover, and at Rochester, Mr Pickwick began his memorable journeys. Rochester, too, was made the scene of Dickens's last novel, Edwin Drood. It was an environment well calculated to impress the sensitive imagination. Here the boy saw great ships sailing down the river and out to sea, and soldiers, in brilliant uniforms, marching and countermarching in sham battle or in dress parades.
There was some education at school, but more at home among a small collection of books, in the library of his father. "From that blessed little room," says David Copperfield, who in this instance is Dickens himself, ''Roderick Random, Peregrine Pickle, Humphrey Clinker, Tom Jones, The Vicar of Wakefield, Don Quixote, Gil Bias, and Robinson Crusoe, came out, a glorious host, to keep me company."
This companionship, however, had in no long time to give place to a very different one.
In 1821 the father's employment took him to London again, where he rented a mean tenement house on Bayham Street, in a squalid suburb. All regular education now ceased and Dickens fell into neglect and became a kind of youthful castaway roaming the streets of London and learning the look of things. Before long troubles came: his father's salary was reduced, poverty threatened the family, and Mrs Dickens in desperation set up a private school. Finally the worst came.
Mr Dickens was sent to the debtors- prison, Marshalsea, where, like Micawber, he felt that the sun was set upon him forever. How deeply this experience entered into the imagination of Dickens, now twelve years old, is told in a bit of vivid personal reminiscence. It was the occasion of the prisoners filing past to sign a petition drawn up by the elder Dickens, a scene reproduced afterwards in David Copperfield. Stationed in a comer, the boy watched the drama with eager interest. "Whatever was comical in this scene, and whatever was pathetic, I sincerely believe I perceived in my comer. I made out my own Httle character and story for every man who put his name on the sheet of paper.
Their different peculiarities of dress, face, gait, of manner, were written indelibly upon my memory. I would rather have seen it than the best play ever played." During these years Dickens had another experience that stamped itself ineffaceably upon his memory. He was thrust into employment at a blacking establishment, to paste labels on pots of paste blacking at six shillings a week.
He has told us how he secretly suffered in this "crazy tumble-down old house, abutting on the river," how he lodged during the week with a little old lady (afterwards Mrs Pipchin in Dombey), how he provided life own breakfasts and suppers and went out to neighbouring shops for dinners, how Satur- day nights he wandered aside to see street-shows and t^ mingle in the motley throng, and how Sundays he passed in the prison with his father.
These were bitter experiences, but they were not to last forever. From 1824 to 1826, his father ha\'ing been released from prison, and Dickens was put into a private school called Wellington House Academy.
Here is development was shown less in his studies than in sundry other occupations, such as writing tales for a club among the boys and getting up theatricals. In 1827 he became a lawyer's clerk, but his education for his future work went on, unknown to himself. Years afterwards his employer recognized certain incidents in Pickwick and Nickleby as having occurred in his office. Knowledge of the law and the ways of lawyers was made use of in many of his
the book details :