A strange manuscript found in a copper cylinder 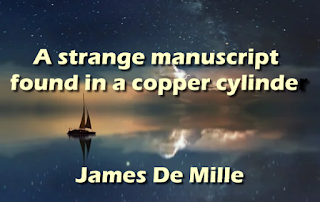 Excerpt
It occurred as far back as February 15, 1850. It happened on that day that the yacht Falcon lay becalmed upon the ocean between the Canaries and the Madeira Islands. This yacht Falcon was the property of Lord Featherstone, who, being weary of life in England, had taken a few congenial friends for a winter's cruise in these southern latitudes.
They had visited the Azores, the Canaries, and the Madeira Islands, and were now on their way to the Mediterranean. The wind had failed, a deep calm had succeeded, and everywhere, as far as the eye could reach, the water was smooth and glassy. The yacht rose and fell at the impulse of the long ocean undulations, and the creaking of the spars sounded out a lazy accompaniment to the motion of the vessel. All around was a watery horizon, except in one place only, towards the south, where far in the distance the Peak of Teneriffe rose into the air. The profound calm, the warm atmosphere, the slow pitching of the yacht, and the dull creaking of the spars all combined to lull into a state of indolent repose the people on board. Forward were the crew
Contents:
I. The Finding of the Copper Cylinder .... 1
II. A Dbift in the Antarctic Ocean 11
III. A World op Fire and Desolation 21
IV. The Sight op Human Beings ... . .31
V. The Toheent Sweeping under the Mountains. 44
VI. The New World 53
VII. Scientific Theories and Scepticism 65
VIII. The Cate-Dwbllees 78
IX. The Cavern of the Dead 86
X. The Sacred Hunt 95
XI. The Swamp Monster 103
XII. The Baleful Sacrifice Ill
XIII. The Awful "Mibta Kosek" 118
XIV. I Learn at Doom 138
XV. The Kohen is Inexorable 137
XVI. The Kosekin 147
XVII. Belief and Unbelief 156
XVIII. A Voyage over the Pole 170
XIX. The Wonders of the "Amir" 179
XX. The Dark Maiden, Layelah 188
XXI. The Flying Monster 198
XXII. Escape 308
XXIII. The Island op Fire 317
XXIV. Recapture 336
XXV. Falling, like Icarus, into the Sea 338
James De Mille was a professor at Dalhousie University, Nova Scotia, and an early Canadian novelist who published numerous works of popular fiction
Download  PDF book 9.6 MN