The life and adventures of the Honble. Augustus Fitzmuddle, afterwards Earl of Muddleton 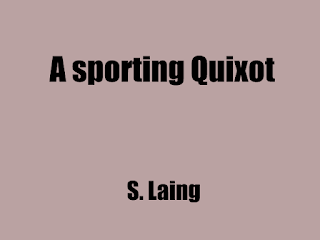 Those who read novels for ingenious plots, stirring incidents, and sensational characters, are warned that nothing of the sort is to be found on these premises; and that, on the contrary, spring-guns are set which may explode unexpectedly, and compel them either to throw down the volume in disgust or go through the exceedingly disagreeable process which is known as thinking. Indeed it may be doubted whether this little book deserves the name of a novel at all. Is " Don Quixote " a novel ? or " Sartor Resartus " ?
For those are the models which, more or less. consciously, and at a humble distance, the author has endeavoured to follow, rather than the traditional type of the three-volume novel. The book originated with some sketches of sporting misadventures made to amuse grandchildren. The next process was to write short descriptions to illustrate the sketches. Then the idea gradually arose of making the hero a sort of modern Don Quixote, and trying to develop the theme that goodness is better than smartness; and show how a shy, sensitive, awkward youth, spoiled by a silly education, was gradually transformed from a muff into a man, and from a man into a model of a simple-minded, kind-hearted, generous, and honourable specimen of an English gentleman.
Download Volume 1