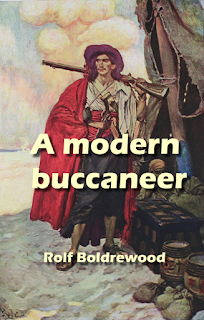 Buccaneers were a kind of privateers or free sailors peculiar to the Caribbean Sea during the 17th and 18th centuries
Excerpt:
Born near Sydney harbour, nursery of the seamen of the South, I could swim almost as soon as I could walk, and sail a boat at an age when most children are forbidden to go near the water. We came of a salt-water stock. My father had been a sea-captain for the greater part of his life, after a youth spent in every kind of craft, from a cutter to a man-of-war.
No part of the habitable globe was unfamiliar to him: from India to the Pole, from Russia to the Brazils, from the China Sea to the Bight of Benin every harbour was a home. He had nursed one crew frost-bitten in Archangel when the blankets had to be cut up for mittens; had watched by the beds of another, decimated by yellow fever in Jamaica; had marked up the "death's-head and cross-bones" in the margin of the log-book, to denote the loss by tetanus of the wounded by poisoned arrows on Bougainville Island; and had fought hand to hand with the stubborn Maories of Taranaki. Wounds and death, privation and pestilence, wrecks and tempests were with him household words, close comrades.
What were they but symbols, nature-pictures, the cards dealt by fate? You lost the stake or rose a winner. Men who had played the game of life all around knew this. He accepted fortune, fair or foul, as he did the weather a favour or a force of nature to be enjoyed or defied. But to be commented upon, much less complained of? Hardly. And as fate had willed it, the worn though unwearied sea-king had seen fit to heave anchor, so to speak, and moor his vessels for he owned more than one in this the fairest haven of the southern main.
Once before in youth had he seen and never forgotten the frowning headlands, beyond which lay so peerless a harbour, such wealth of anchorage, so mild a clime, so boundless an extent of virgin soil; from which he, " a picked man of countries, "even then prophesied wealth, population, and empire in the future. Here, then, a generation later, he brought his newly- wedded wife. Here was I, Hilary Telfer, destined to see the light. From the mid-city street of Sydney is but a stone's throw to the wharves and quays, magnificent water-ways in which those ocean palaces of the present day, the liners of the E and 0. and the Orient, lie moored, and but a plank divides the impatient passenger from the busy mart. Not that such stately ships were visitors in my school-boy days. Sydney was then a grass-grown, quiet seaport, boasting some fifty thousand inhabitants, with a fleet of vessels small in size and of humble tonnage. But, though unpretending of aspect, to the eager-hearted, imaginative schoolboy they were rich as Spanish galleons.
For were they not laden with uncounted treasure, weighed down with wealth beyond the fabled hoards of the pirates of the Spanish Main, upon whose dark deeds and desperate adventures I had so greedily feasted? Each vessel that swept through the Heads at midnight, or marked the white-walled mansions and pine-crowned promontories rise faintly out of the pearl-hued dawn, was for me a volume filled with romance and mystery. Sat there not on the forecastle of that South Sea whaler
Download 15.8 PDF book