A discourse of the Baconian philosophy 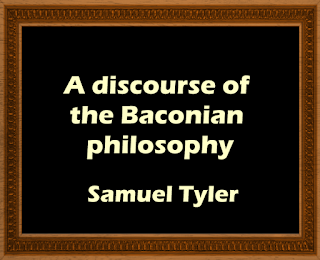 Excerpt:
The whole empire of human thought has been traversed in the discourse, revelation, as well as nature, has been searched, and Induction has been found everywhere, the true method of Investigation,
And so far from its being the Organon of Infidelity and Atheism, as has often been asserted, it is found, that all the lines of investigation which it lays open, whether in physics or psychology,, ultimately converge and point upwards, to an inquiry that results by the strictest logical necessity in the belief of a God. And when the province of revelation is entered, it is found, that the very truths which Induction has discovered in the province of nature, are assumed as true, in its teachings: and that nothing is told in the revelation which does not consist with the inferences which Induction has established in the province of nature.
And on the other hand, whenever man has cast aside Induction, and let go the thread of experience as an inadequate clue to the labyrinth of knowledge, and attempted by an apriori method of investigation and its corresponding doctrine of fore-knowledge, to ascertain the truths whether of nature or revelation, we find that nothing but ever-varying and ever-increasing error has been the result. It would seem, therefore, to be a legitimate conclusion; " that the understanding cannot decide otherwise than by Induction."
In undertaking a task so foreign to my habitual pursuits, I have been influenced by a love of truth, and a strong desire to vindicate a Method of Investigation, which by its great doctrine, that experience is the only light to our path, and lamp to our feet in the pursuit of knowledge, is pushing forward the frontiers of science in every possible direction, with such triumphant success. And when I reflect, how far the task was beyond my abilities, I rejoice to know,
Download