A club; an assembly of good fellows 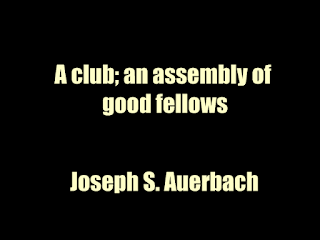 A CLUB In memory of long, unbroken comradeship with fine fellows and beautiful streams and woods and fields, this rambling journey is affectionately inscribed as the tribute of the lover to them all.
All morning there had been a little gathering of people outside the gate. It was the day on which Mr Meredith was to be, as they say, buried. He had been, as they say, cremated.
The funeral coach came, and a very small thing was placed in it and covered with flowers. One plant of the wallflower in the garden would have covered it. The coach, followed by a few others, took the road to Dorking, where, in a familiar phrase, the funeral was to be, and in a moment or two all seemed silent and deserted, the cottage, the garden, and Box Hill. The cottage was not deserted, as They knew who now trooped into the round in front of it, their eyes on the closed door. They were the mighty company, his children, Lucy and Clara and Rhoda and Diana and Rosa and Old Mel and Roy Ricmond and Adrian and Sir Willoughby and a hundred others, and they stood in line against the boxwood, waiting for him to come out. Each of his proud women carried a flower, and the hands of all his men were ready for the salute. What a rebuke is such words for our dullness of vision! How much more then, can we be said to continue in the companionship of those comrades who have really lived, and who are now the haunting memories of these rooms and fields and woods and streams.