Pharaoh To Farouk by H.Wood Jarvis 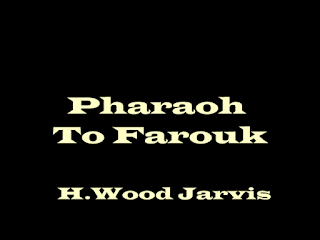 Those Five Thousand Years had seen the successive stages of a brilliant pageant the Foundation and the Fall of Thebes; the Oppression and Exodus from Egypt of the Chosen Race; the fatal fascination of the irresistible Cleopatra; the intellectual zenith of Euclidian Alexandria; the defeat of the cohorts of Imperial Rome by invincible Caliphate Cavalry; the glittering resplendence and inhuman massacre of those picturesque tyrants, the Mamelukes; the construction and completion of the world's most revolutionizing Canal; the titanic rivalry of France and England; the crowning victory in Egyptian waters of the immortal Nelson; the Egyptian 1 Sir Arthur Bryant in the Preface to his English Saga. (My italics,)

darkness into which leapt the light that shone 'in the sudden making of splendid names' Saladin, Napoleon, de Lesseps, Gordon, Watson, Cromer, Kitchener, Wingate, Allenby, Wavell, Montgomery. If, in spite of all this, the reader finds that at the present moment of unparalleled gravity in human affairs he is asked to concentrate his attention even though for only a few pages upon the calamities and crises of a period so remote from our own days as ancient Egypt, it is only because the story of Egypt, from Pharaoh to Farouk, is an indivisible unit. The Egypt of the British Occupation in the foreground and that of the Pyramid Bangs is the background of one and the same clamantly human picture.