The will power: its range in action 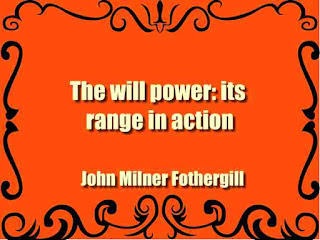 This is not a metaphysical enquiry, but a practical book; a book which it is hoped will be found useful by many, — especially those entering the battle of life. What the will is, is a matter upon which metaphysicians have not yet been able to make up their minds, after all the attention bestowed on the subject; and when they have come to some conclusion, either of agreement or fixity of disagreement, the result will have no practical value. " She has a will, she has ! " the mother or nurse will say of some child then, just as they have done, and do now; and will do after the learned word-weighers have arrived at their decision. Will is one of the " little men who stand behind us," mind, soul, spirit, will, intangible some- things, revealed to us, — how?
We say he has a  " right mind " of a man like the late Dean Stanley; we speak of an " ardent soul " like the late Charles Kingsley; or he is " a man of spirit," like the late Lord Palmerston, or " a man of resolute will," like Prince Bismarck. But beyond this, we speak of " a comprehensive intellect " as in the case of the late Count Cavour. We know these " little men " in a familiar way'; but we can no more define them than we can put them up in Canada balsam, and inspect them at our leisure under the lens of the microscope. Yet we never hesitate to use the words, nor is there any difficulty about their being comprehended by others.
When each word falls on the ear it has not either an unknown or a doubtful sound. ^A^ man may possess a sound mind, be a good soul, in both senses, be of a loving spirit, and yet not be remarkable for willpower. Like Mr Brooke in " Middlemarch," he may be poured into any mould and keep the shape in none. A man may be possessed of much ability and yet on a practical failure, because he is irresolute, or lacking in willpower.
On the other hand, a man may have but moderate abilities, and yet attain great success because he 'possesses a firm will George Eliot has brought out this contrast of character in bold outline, in the difference between Tom Tulliver and his sister Maggie in "The Mill on the Floss." Tom is certainly narrow, as destitute of imagination as ever a Dodson could be, but he is inflexible.
Maggie has warm sympathies, an active imagination, intellectual capacity; but she lacks the will. It may be impossible to define this will, but we understand what we mean by it when we speak of its presence or its absence. When it becomes excessive, we speak of " wilful; " and no better illustration could be had, than that of George III., of glorious memory, of whom Landor said savagely, "he was the least mischievous when he was the most incapable."
Another of our monarchs furnishes an illustration of an opposite condition — " Ethelred, the Unready," where the lack of will left him unprepared for emergencies. In George III., we see the same hard, unyielding obstinacy, as was. exhibited in the character of George I. Argument fell dead upon these two men; they went their own way, yet neither were men of capacity!
Whether in combination with great talent or mediocre ability, it is the presence of what we call "will" which endows the individual with "character." "Character" by no means involves originality; though when that is also present we speak of the individual as " a great character "; a matter quite different from a "character" on the stage, or the "character" of a Scotch village crowd. It is scarcely possible for a man to be a really great man, possessing influence over those around him (who are not in his power) without a large share of what we designate " will."
One family will have no striking characteristics, yet always be respected from their decision of character: while another family will have more talent, yet be without influence upon anybody. We value the opinion of one man and are ready to ask him for it; while another has perhaps more mere intellectual ability, but no one ever dreams of consulting him on any serious subject.
John Milner Fothergill British physician John Milner Fothergill, M.D., was a British physician and medical writer
the book details : Download