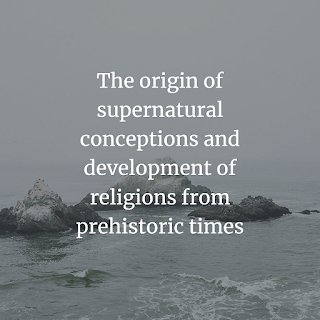 Excerpt:
Before attempting to investigate the origin of religion, it may be well to fix a definite meaning to that constantly employed word. We find in the modern lexicons numerous meanings ascribed to the word religion, that differ widely in their nature, and are antagonistic in their purport. If by religion is meant the healthful development of the right life, a practice of conscientious duty to our fellow men, and abstaining from all injustice, every right-minded man must give it his approval. But if by religion is meant " a system of faith in, and worship of, a divine being or beings " (entirely beyond our knowledge, except the traditions of unknown authors of mystic legends, unconfirmed), the modern agnostic disbelieves. We have generally used the word religion in the latter sense, as dogmatic, in the succeeding pages. There are few noted scientists in modern times who would not be classed as agnostics.
They are generally so entirely engrossed in the search for, and development of, truth, which is making such wonderful progress at the present day, that they have no time to devote to discussions about current beliefs in religion, nor to the petty altercations of the theologians over dogmatic interpretations and creeds, which neither their authors nor interpreters have any real knowledge of the truth of, and of which there is no proof but vague tradition.
The mission of an iconoclast is not only displeasing but perilous; in attempting to destroy the time- consecrated idols believed in for ages, he cannot expect to escape vituperation, unfair criticism, and opposition. Fortunately, these days he cannot here be assailed with imprisonment, torture, or death. Ostracism, anathema, and slander are the only weapons left the fanatical force in America, although severer penalties are still imposed elsewhere for differing from or opposing established faith.
[Download This PDF Book ##download##]
Religions
Next Post Previous Post
No Comment
Add Comment
comment url
Atheism,freethought,History,Religions