The development of Greek philosophy 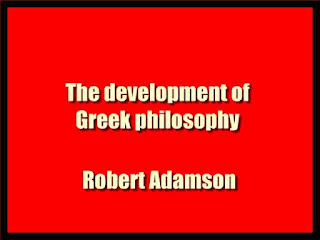 Greek philosophy forms a continuous development. The Aristotelian system is based on and complementary to the Platonic both in general character and in its treatment of special problems. The Platonic system, in its turn, can be understood only as carrying out tendencies that had found expression in earlier thought. The interest of these earlier thinkers is not merely historical. They exhibit philosophy in the making.
And if we seek to solve the problem of the place of philosophical reflection in human culture as a whole, we can approach an answer only by the slow method of tracing the origin and history of thought. Greek philosophy has impressed itself on modern thinking, raising the problems for it and suggesting the methods of their solution.
It implied a conception of the general aim and possibilities of philosophy to which modern thought must adjust itself, adopting, rejecting, or modifying it. It is besides the one instance in history of a reflective movement which, starting from the mythical stage, has afterwards A built for itself an independent foundation and established an independent position.
At the same time, the influence of the earlier mythical stage may be traced in the speculative distinctions of apparently disinterested thinking as they come before us in the Greek philosophers. One very general point may be taken as illustrating this. The view that it is the business of philosophy to find a conception that will unify the results of the special sciences has an unmistakable resemblance to a characteristic of the earliest myths.
For they seek to give a complete story of how things have come about, such as will satisfy the rudimentary needs of the inquiring mind. And this reason, balance suggests the interesting question of whether the developed conception of the philosophical mind has more justification or other foundation in the reality of things than the primitive mythological impulse which expressed itself in early stories of gods and men. In the earliest efforts of Greek philosophy, we can detect more than this general resemblance between philosophical and mythological conceptions.
The characteristic of the mythological work is twofold. There i«, in the first place, the primitive process called personification, which lies at the root of animism, the tendency to regard objects and processes of nature as like in kind to personal beings and human activities. Equally prominent, in the second place, is the tendency to depict the personal being, his motives, thoughts, and acts, after the gross image of external things. Thus, in the stage of mythical reflexion, the Soul is represented Jn most material fashion.
At first, it is no more than the shadowy aerial image of the corporeal living being. Such a soul is anything but the bearer of those psychical activities which are familiar enough in the details of ordinary life. At a still earlier stage, the thoughts, feelings, and actions of the human being were not regarded as the expression of a shadowy double of the concrete person; they were represented, without distinction of corporeal and spiritual, as merely dependent on the living body. The main lines of development that proceed from this mythical basis are cosmological and psychological. I
t has been well said that the problem of cosmological speculation differs from the aim of mythology in this: that while the latter represented the connexions between its assumed ground and existing realities after the crude fashion of temporal sequence, the more philosophical view raised the question, what is the permanent element in real existence and of what are actual things composed?^ The change of question implied a restriction upon the free play of imagination, which constitutes the difference between philosophy and mythology.
The cosmological inquiry generally aimed, in the first instance, at what Aristotle called a material principle or cause of things.^ The simplicity of the answers given corresponds to the imperfect development of the experience which called for an explanation. And the gradual deepening of I these answers was determined not merely by insight into the imperfection of preceding solutions, but by increased range and accuracy of concrete experience. Indeed, the most serious obstacle to understanding the course of Greek speculation is that the character and history of the ordinary knowledge of nature among the Greeks are known to us only in outline.
From the early Ionian school to the time of Plato there can be traced a tolerably definite line of speculations as to the permanent substratum of natural fact and i as to the way in which that substratum is connected with the particulars of concrete experience. The psychological line of development is not conspicuous till a later stage.

Part I
Greek Philosophy Before Plato
I. The Early Ionian Philosophers.
Ii. Ptthagoras And The Pythagoreans
Iil The Bleatics
Iv. Heraclitus.
V. Anaxagoras.
Vl Empedocles.
Vil The Atomists
Viii. The Sophists And Socrates
Ix. The Minor Socratic Schools
Part2
Plato
I. First Form Of The Theory Of Ideas . . .91
Ii. Later Metaphysic: The Parmenides, Sophist, And
Pbilebus ....... 104
Ill Doctrine Of Soul .114
Iv. Final Mbtaphysic
V. Plato's Solution Of The Problem
Vi. The School Op Plato
Part 3
Aristotle
L Plato And Aristotle
Ii. Fundamental Conceptions.
I. General Division Of The Realm Of Existence
Ii. The Conceptions Of Change And Purpose
Iii. The Conceptions Of Form And Matter
Iv. The First Cause
V. The Soul...
M. Theory Of Knowledge
L Demonstration And Opinion
Ii. The Principle Of Contradiction
Iii. Metaphysical Principles Of The Theory Of Knowledge
Iv. The Concrete Individual
V. Place Of The Syllogistic Forms
Vi. Syllogism And Induction
Vii. The Ultimate Data Of Knowledge
Viii. The Immediate Object Of Apprehension
Ix. Induction And The Universal.
X. Intuition And Discursive Thought
the book details : Download 7.1 MB