Phantoms of the deep, or: legends and superstitions of the sea and of sailors 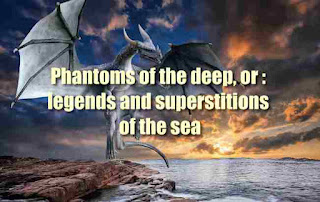 Among the many wonderful changes wrought in the various conditions of life by the progress of the scientific investigation and modern achievement, there are none so complete as those affecting the man of the sea. The swift journey to Europe has become an affair of so little moment to many that it is hardly thought of until Jand fades from sight, and the modern traveler sets out on his voyage around y/ the world with less trepidation than the Roman poet felt and described when he left his native city for the short journey that carried him across a narrow sea into temporary banishment.
It is difficult, then, for us to realize the terrors which the ocean possessed for the ancient mariner — almost impossible for us to understand the implicit belief which he evidently held in the many monsters, fiends, physical dangers and curious phenomena that would now only serve to provoke laughter or astonishment.
Not only was the sailor in ancient times exposed to greater sea peril by deficiencies in the construction of his vessel., but, in addition, his imagination created a host of fancied dangers to terrify him. The dangers of the sea voyage are often portrayed by classical writers. Horace, in his third ode, "in lamenting the departure of Virgil for Athens, paints these terrors in vivid colours; speaking of horrid sea-monsters and terrific waves, Andocides, accused before the courts at Athens, said, " The dangers of accusation and trial are human, but the dangers encountered at sea are divine." "Sea voyages among the Egyptians were looked upon as sacrilegious."
Nor did these imaginary terrors disappear with antiquity. The first charts had portrayed on their numbers of huge monsters, horrible dragons, and terrific giants, scattered here and there like the ships marked on charts of more recent date.
The land-locked ocean known to the ancients had been filled with unknown terrors, and the distant lands bordering on it, with wonders and strange inhabitants. Monsters abode in the waters, gods of monstrous shapes ruled them, enchanting sirens, horrid giants, and terrible dragons inhabited the islets and rocks, and on the dry land beyond, there dwelt strange enchantresses, fire-breathing bulls, dwarfish pigmies, and man-eaters.
The crude ideas concerning geography, making the earth now a disk, now a drum, a boat or a flat surface surrounded by water, aided in perpetuating to later ages these curious beliefs. Thus sailors as well as landsmen, in all ages, have been prone to indulge in fancies of all kinds concerning the winds and waves.
Such notions are naturally directed to the weather, the object of so rhuch care and solicitude to the mariner. In antiquity, the Great Ocean was thought to be unnavi- gable. Flowing around the world like a river, it became, as we shall see, a river, then a sea of death. This circumambient ocean was not peculiar to the Greeks.
We find it in other cosmogonies, as the Norse and Arab geographers, about 1300, revived the idea. As men became more and more acquainted with distant waters, their ideas concerning this unknown ocean expanded.
At first, it was the Central Mediterranean in which were located all the Homeric dangers of the ocean. This was gradually extended to the westward, and finally into the Great Western Sea, after the French discovery of the Canaries (1330).
Another thing assisted the growth of the myths of sea dangers and perils. Many ancient tribes feared and detested the sea, as do some castes of Hindoos at the present day. Early navigators, when driven by stress of weather or impelled by love of gain or adventurous spirit beyond the usual limits, reported such things of the unknown seas, that others were often deterred from following in their footsteps, and thus profiting by their discoveries.
To these tales we owe many of the myths of sea and wave; others are doubtless embodiments of religious belief or explanations of natural phenomena. It is thus with the first great sea epic — the Odyssey.
In its entirety, it probably embodies a myth, but its details are undoubted traditions of dangers encountered or related by early mariners. At first, then, these Homeric sea perils lay no farther west than the Sicilian isle. But gradually they were re-moved toward the setting sun. Scylax says the Straits of Gibraltar are the end of the world, and ships can navigate no farther.
Later traditions perpetuated this idea, even after ships had ventured beyond these gates. Edrisi, an Arab writer, says there was at Gibraltar a stone pillar, one hundred cubits high, with a brass statue on it, arid an inscription stating this to be the limit of navigation. So El MasudiJ says these pillars of King Hirakl carried an inscription warning mariners that no vessel could safely venture beyond into the sea of darkness.
Ulysses tells Dante § that he had tried the voyage beyond these pillars, and had perished in sight of a monstrous island, " for out of the new land a whirlwind rose and smote upon the fore part of the ship." Thus of the region beyond. And more yet. II Carthaginian sailors said that the South Atlantic be- yond Cerne was not navigable because of floating seaweed and shallows. Herodotus says Sesostris was stopped by shallows in the Red Sea, which was long thought dangerous because of its red colour. To the time of Columbus, these fancies prevailed, and his crew were terrified of entering the Sargasso Sea by the weeds and calms.
the book details : Download 12 MB