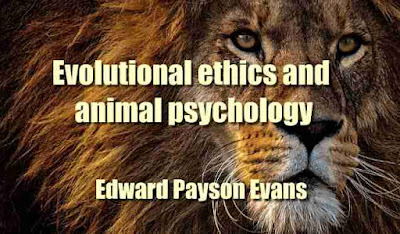 The recent enlargement of mental science. The close connection between evolutional ethics and animal psychology. Modem survivals of medieval metaphysics and anthropocentric ethics. "Zoophily." The personification of inanimate objects by primitive peoples. Example from the Kalevala. Observation of animals by hunters and herdsmen in early society. Superstitious fear of animals and the rise of zoolatry. Survivals of animal worship in the cults of civilized races. Human appreciation of the lower animals as the result of their domestication. Their position as members of the tribe or family. They're worth recognised by primitive legislation. Tie dog in the Avesta. Zarathustra's care for cattle. Buddha's precepts in respect to animal life.
The doctrine of evolution was taught by Greek philosophers. The Ionic school of naturalists. Aristotle and Theophrastus. Greek speculation from Thales to Proclus. Celsus and Origen. Advanced views of Nemesius. His superiority to St. Augustine. Thomas Aquinas and the scholiasts. Beasts as types and symbols of spiritual truths. Their equality with a man before the law. The principle of animals' rights asserted by evolutionists and generally op- ' posed by theologians.
Lotze's theory of soul and body. Psychical faculties as affected by the physical organism. Their coetaneous development and peculiar interdependence in the pithecoid stage of man's evolution. The starting point of. humanity. General intelligence in the simplest organisms. Observations of Darwin and Romanes. The growth of instincts is analogous to the formation of habits. The measure of man's duty to the lower animals is determined by the degree of their mental development,

Introduction: Animal psychology as the foundation op animal's eights in the historical evolution of ethics 1
EVOLUTIONAL ETHICS.
I. — The ethics of tribal society 19
II. — Religious belief as a basis of moral obligation 58
III. — Ethical relations of man to beast .... 82
IV. — Metempsychosis 105
ANIMAL PSYCHOLOGY.
V. — Mind in man and brute 165
VI. — Progress and perfectibility in the lower animals 197
VII. — Ideation in animals and men 222
VIII. — Speech as a barrier between man and beast. 270
IX. — The .esthetic sense and religious sentiment in animals 333
Bibliography 359
Index 369
the book details : Download 7.8 MB