Within the mind maze, or, Mentonomy, the law of the mind 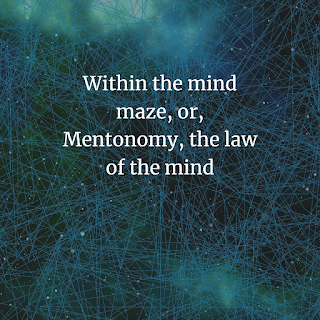 This book is commended to all good and progressive men and women who believe that by studying the mind, discovering its laws, and applying them to human betterment, the career of man on earth could be greatly improved. And that the appalling errors, war, alcohol, oppression, injustice crime, and poverty can be abolished, together with a large proportion of disease, pain, and unhappiness. On October 5th, 1858, I began the study of astronomy; this was in my eleventh year. I found that a transit of Venus across the disk of the sun was predicted to occur on December 6, 1882. Often during the ensuing 24 years,
These articles are being written under an impression so strong that it rises to the dignity of a belief, that Mind, ex- pressing as human, or, in the human phase, is able by studying the material universe, to discover some facts relating to its Creator. The main object in publishing these articles is to convince the reader that the universe stands upon a mental base, rooted and grounded in Mind; and that Mind created what we have named electrons.
No hope is entertained by the author that the true nature of either Mind or matter will be discovered in this study, but hope is expressed that a few clues will be found. No definition of the words Mind, will, thought, create, creating, creation. Creator, infinity, eternity, duration, time, space, existence, being, mentation, personality, or life will be offered.
The reader is at liberty to search all dictionaries and lexicons for meanings of these mysterious words, and adopt those he most admires. These articles are merely a search for clues. hints or suggestions, as to their import. The method employed will be this: critical research in the properties of Mind and matter within the range of human sensation, will be made, and all clews compared. Then the assumption will be made that the Creator must be endowed with any given attribute to create any discovered property of matter. This statement, 'create any property of matter," is obscure, and may not be the best one to use, but this subject will be studied later. I would consider it to be a great favour if the reader will hold all his theories and beliefs in abeyance until he has read the entire series of articles; that is, not to decide finally upon the dictionary definitions of any of the words in the above list 343 — merely hold tentative or preliminary definitions, and approach this study with an Open Mind. If doctrines here presented a conflict with his own, I would be pleased to have him suspend final judgment until all the words in the articles have been weighed, and compared with all the others.
The subjects Creator and creation are as old as thought itself, and their antiquity dates back to the time in the distant past when men really began to think. For many centuries, the great, the good and the true minds of each have thought, studied and written upon these inexhaustible themes. I scarcely hope to add anything, but do hope to rearrange long-existing ideas along lines marked out by late discoveries in ontological and physical science, in mentation and radiation, in thought forms and their activities, in thought origins and their subsequent transmission, in thought projection and reception. Throughout the articles Mind, mentation and directivity will ever be given prominent and high places. But to the matter will be assigned an exalted position also
. An endeavour will be made to explore the labyrinths of both Mind and matter, in elaborate search after the Creator. Where exists intelligence must be the abiding place of the Creator. Intelligence is on display within all that part of the Universe within the scrutiny of a man with added powers of telespectroscope, telecamera, sensitive plates, the new ultra-violet light microscope, balance, crucible and retorts. Intelligence acts everywhere in this vast realm. If intelligence, the Master Mind, has one centre of radiation, this central Mind is the Creator. If an infinite, omnipresent Mind exists, it is the Creator. But infinity has no centre. To find the Creator is to locate Mind. Mind is the only entity alive; where does it exist? All questions presented to man for solution subside into insignificance before this one supreme problem.
The expression "finite Mind" may be in error, for finite is always a part of the infinite. Mind, at least the units now functioning as human mental personalities, may be unable to think of all the other units — of infinite Mind.