The Stoics, Epicureans, and Sceptics 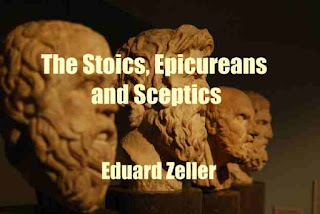 The favour with which a previous attempt to render one portion of Dr Zeller's work accessible to English readers has been received, induces the translator to offer a further instalment. The former translation dealt with that part of Dr Zeller's Philosophie der Oriechen which treats of Socrates and the Socratic Schools, thus supplying an introductory volume to the real philosophy of Greece as it found expression in the systems of Plato and Aristotle.

The present volume, taking up the history of philosophy at a time when the real philosophy of Greece was over, and the names of Plato and Aristotle had become things of the past, aims at supplying an introductory volume to another portion of the history of mind — the portion, viz. which may be collectively described as the post-Aristotelian.
To the moralist and theologian no less than to the student of philosophy this portion is one of peculiar interest; for the post-Aristotelian philosophy supplied the scientific mixed into which Christianity in the early years of its growth was cast, and bearing the shape of which it has come down to us. No complete history therefore of either morals or theology is possible, which does not know something of the systems contemporary with the first ages of the Church. In the present volume, the translator has followed the same method of translation as in ' Socrates and the Socratic Schools.' In the hope of rendering it as intelligible as possible, he has made it his aim throughout to eschew all unnecessary technicalities.

The problems proposed to the Stoic philosophy
1. Its practical character
2. Necessity for intellectual knowledge
3. Attitude towards logic and natural science of
Aristo — of Zeno and Cleanthes
C. Divisions of philosophy.
1. Threefold division.
2. Relative importance of each part
CHAPTER V.
LOGIC OF THE STOICS.
A. General remarks .....
1. Field of Logic...
2. Words and thoughts...
B. Theory of knowledge...
1. General character of this theory
2. Prominent points in the theory — perceptions — conceptions — standards of truth
C. Formal logic.
1. Utterance in general...
2. Incomplete expression — words — the categories
3. Complete utterance — judgment — inference — falacies .....
D. Estimate of Stoic logic...
1. Its shortcomings...
2. Its value .....
THE STUDY OF NATURE: 1. FUNDAMENTAL POSITIONS.
A. Materialism . . . . . .126
1. Meaning of the Stoic Materialism . . . 126
2. Causes that led to Stoic Materialism. .132
3. Consequences of Stoic Materialism — individual
perceptions — theory of universal mingling
__________________
Materialistic nature of the soul
2. Divisions of the soul . .
B. The Individual Soul and the Soul of the Universe
C. Freedom and Immortality

ETHICS: 1. THE GENERAL PRINCIPLES OF THE STOIC ETHICS. ABSTRACT THEORY OF MORALITY.
A. The Highest Good
1. Nature of the Highest Good
2. The Good and Evil.
3. Pleasure and the Good
4. Negative character of Happiness.
5. The Highest Good as Law.
B. Emotions and Virtue
1. The Emotions — their nature — varieties of
2. Idea of Virtue— positive and negative aspects of —
the virtues severally — their mutual relations — unity of virtue
C. The Wise Man
1. Wisdom and Folly.
2. Universal Depravity
3. Conversion.
the book details : Download 13.5 MB