The individual in the animal kingdom (1912) PDF by Julian  Huxley 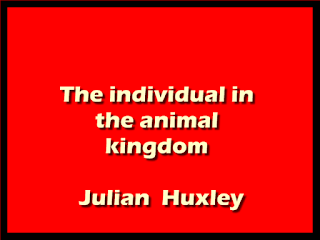 Sir Julian Sorell Huxley FRS was an English evolutionary biologist, eugenicist, and internationalist. He was a proponent of natural selection and a leading figure in the mid-twentieth century modern synthesis.
Excerpt:

The professed biologist must not cavil when he finds some merely general truth set dogmatically down as universal; in biology (still so empirical and tentative) there are always exceptions to the poor partial "Laws' we can formulate today. To have qualified every statement that needed qualification would have added much to the book's bulk without aiding the argument or being really more " scientific." My indebtednesses are great. It will easily be seen how much I owe to M. Bergson, who, whether one agrees or no with his views, has given a stimulus (most valuable gift of all) to Biology and Philosophy alike. The various Oxford philosopher-Mends who have helped to comb out the tangles of a zoologist's mind know how grateful I am to them: I will not name them here for fear my heresies be laid to their charge.
Contents of the book :
I. The Idea of Individuality 1
II. The Biological Foundations of Individuality . . 31
III. Some Other Definitions of Animal Individuality. 66
IV. The Second Grade of Individuality and its Attainment 85
V. The Later Progress of Individuality . . . 114
VI. The Relation of Individuality to Matter: Conclusion 144
Literature cited 155
Appendix A 157
Appendix B. .159
Index 162