Reason and authority in religion 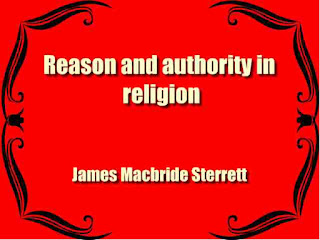 Discredit of Old Authorities.
" Father, don't you know that we left that word must behind when we came to this new country?" This was Patrick s reply to a priest, who said that he must take his children from the public school and must send them to the parish school. This fairly represents the uttered or concealed reply of the mass of thinking men in the modern world to any presentation of the old authorities, when prescribed without further ground than an uncriticised imperative.
We have left behind the must of an infallible Church, of an infallible Bible, and of an unerring reason. Each one of 1these in turn has been abstracted from an organic process and proposed as the authoritative basis of belief.
The inadequacy of the proof for such infallibility has rendered this claim of each one of no effect. The abstract reason, which was first used to discredit the other two, has fallen into the pit which itself dug, and de pro- fundis rise its agnostic moans. Hence the task laid upon us in these days is that of inquiring whether these old musts do not have real authority, other and more ethical than the one rightfully denied; to see whether they do not have a natural and essential authority that rational men must accept in order to be rational.
The Function of Criticism. A criticism that is merely negative is both irrational and inhuman. The function of criticism is to be the dynamic forcing on from one static phase of belief and institution to another, to destroy only by conserving in higher fulfilled form.
Its aim can only be to restore as reason what it first seeks to destroy as the unreason of mere might; to restore as essential realized freedom what it momentarily rejects as external necessity. Such work involves a thorough reformation of the whole edifice of dogma and institution, a thorough reappreciation of the genuine worth of these works of the human spirit under divine guidance. Such a task implies an ideal of knowledge vastly different from that of ordinary rationalism.
That holds an abstract subjective conception of truth, imagined under the form of mathematical equality or identity. It has no place for development or organic process, and none for comprehension of concrete experience which it vainly tries to force into its mechanical forms. This method, on the contrary, simply undertakes to understand the concrete experience, under the conception of organic development in his toric process. It can attempt no demonstration of the organic process of religion by anything external to it. It seeks only to give an intelligent description of the process.
The process itself gives the conception of its rationality. It declines to abstract any part of the processor to seize any one of its static moments and make that the measure or the proof of the whole, as ordinary apologetics attempt to do.
The real history of religion, then, like the real history of any organism in nature, is its true rationality and vindication. The reason appealed to, also, is that which manifests itself in the corporate process, and not in the individual member. A religious individual is an abstraction. The truth is the whole concrete historical institution of which he is a member. Only as he experiences or mirrors the various stages of this organic life can he understand or express the rationality of religion. His certitude rests upon authority, which he, as autonomic, must finally impose upon himself. Objective rationality can only thus become subjective and afford real grounds of certitude. Such a method of acquiring 1 rational certitude may not satisfy those whose ideal of knowledge is that of ordinary rationalism. But have we not vainly tried to satisfy such an ideal long 1 enough? Has not the century and a half of " the age of reason" landed us in agnosticism, from which it cannot extricate us?
Are we not ready to abandon the attempt of such rationalism and try the higher method? This method consists of a historical and philosophical study of religion. The historical inquiry should first enable us to see the value of the Bible and Church as records and aids of the religious life of the past. The philosophic inquiry should then enable us to see their necessity and worth to the religious life of our times.
Neither of these methods is so irrational as to dare to sectarianize our religious life from that of the past. Both see this life as a continuous process and only seek to understand and interpret what has been, as an aid to what should be. Neither of them is individualistic. Both of them study the individual as an organic member of the social whole, recognizing- that the wisdom and the work of the many, especially as an organized community, is always greater than that of any of its members; reformers never being more than organs of the nascent communal spirit.

PART I.
Reason and Authority in Religion.
Discredit of Old Authorities 15
The Function of Criticism 16
Theories of Society Supplanting Theories of
the Individual 20
The danger of Weak Romanticizing 22
The Right of Private Judgment 25
Ground and the " Urgrund " of Religion ... 27
Religion Genuinely Human 30
What is Religion ? 31
Revelation, . 32
Faith 34
Sub-personal Conceptions of the First Principle 36
The Ultimate Conception of the First Principle 38
Religion Has a History 41
"I Believe " implies a " They Believed " and
a " We Believe " 43
What Do I Believe? 44
Why Do I Believe the Catholic Faith? 45
PART II.
The Psychological Forms of Religion.
Three Chief Forms: Feeling, Knowing and
Willing 49
1. Religion as Feeling 50
2. Religion as Knowing 53
(a) That of Conception 53
The Catechetical and Dogmatic Period 56
(b) Reflection, Criticism and Doubt 60
Saintly Doubt. 61
Sinful Doubt 65
Faith as the Ground of Much Skepticism 66
Religious Knowledge Conditioned by
the Incarnation 68
(c) Comprehension the Highest Form of
Knowing 69
The Function of Philosophy 71
The Necessity of Religious Certitude.. 75
Philosophy of History 78
Philosophy of Religion 79
Modern Thought as Christian Thought 81
Use of the Nicene Symbol 82
Non-CEcumenical Theology and Theories. . . 84
The Law of Liberty also the Law of Duty. . . 85
The " Must "of the Bible 86
Open Questions 90
Inadequacy of Mere Theoretical Knowledge. 93
Religion as Willing.
This Rome-element Records Its Creed in Its
Deed 96
The Moral Argument for Christianity 97
Instituted Christianity the Kingdom of God 99
Mechanical and Ethical Conceptions of the Church 99
The Church and the State 100
Greek, Roman and Germanic Elements in
Modern Christianity 102
The Christian Consciousness and Authority. 104
Self-Consciousness and Certitude . . 107