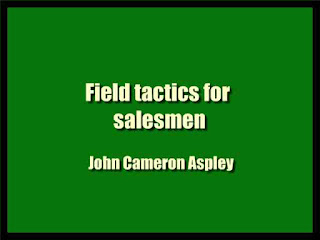 modestly claim to teach anyone how to sell goods. “Field Tactics” is in no sense a textbook on salesmanship. It does not concern itself with either the “psychology” or the “theory” of sell¬ ing. It deals only with the practical work-a-day problems which every salesman is constantly called upon to meet and solve.
It cannot tell you how to solve all your tactical problems, but it does tell you how other salesmen are solving similar problems and overcoming similar obstacles. Not all the methods and plans suggested in these pages will be of immediate interest to you.
Some of them will seem far removed from the coditions under which you are at present work- 5r. g. But we sincerely believe that any salesman,, matter how successful he may be or how much money he is making, will get many fresh view¬ points, a few valuable ideas, and considerable stimulation by studying the methods used by other successful salesmen. If nothing more, they will stimulate original thinking and broaden your point of view.
The suggestions represent picked experiences of the most successful salesmen and sales man¬ agers in over two hundred and fifty lines of busi¬ ness. Some of them have been selected from sales manuals issued by concerns such as The National Cash Register Company, The Alpha Portland Cement Company, Beckett Paper Company, Pacific Mutual Life Insurance Company, Federal Electric Sign Company, Quaker Oats Company, Street Railways Advertising Company, etc. Some of the plans have already appeared in weekly news bulletins furnished subscribers to the Dartnell Monthly Sales Service. Others have been found in house organs like The Addressographer,
The Palmolive News, The Protecto-graph Weekly Bulletin, etc. In the aggregate, they comprise the most helpful collection of tactical plans for salesmen ever published in one volume. Anyone who will study and apply the meth¬ ods suggested in this Manual will become a better salesman and a bigger moneymaker for himself and for his house. They represent experiences that have cost other salesmen much time and money to acquire. But it is not enough to read about these methods of other successful men— the best selling idea ever conceived is worthless unless you put it to work.
Territory Analysis
I—Getting the Most Out of a Territory
II—Working a Metropolitan Territory.
III— Working a Provincial Territory.
IV— Knowing a Territory Too Well.
ALL works of taste must bear a price in proportion to the skill, time, expense and risk attending their invention and manufacture.
Those things called dear, are, when justly estimated, the cheapest. They are attended with much less profit to the artist than those which everybody calls cheap. A disposition for cheapness and not for the excellence of workmanship is the most frequent and certain cause of the decay and destruction of arts and manufacturers.
the book details : Download